World Athletics Championships: All you need to know 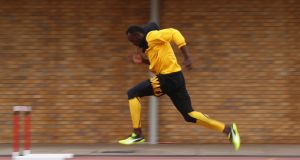 Usain Bolt during a training session ahead of the World Athletics Championships in London 2017. Photograph: Michael Steele/Getty

So what’s the exact lowdown?

The 16th World Athletics Championships, over 10 days, starting this Friday evening until Sunday week, back inside the London 2012 Olympic Stadium, mostly evening sessions (only four morning track sessions, thank the Media Gods), featuring 2,034 athletes, from 205 nations, across 47 medal events, with a prize purse of just over $7 million. Only the biggest global sporting event of the year.

Who are the star attractions?

Usain Bolt’s last ever championships, in the 100m and 4x100m relay, looking for World gold medal number 13? Mo Farah in his last track championship too, aiming for another 5,000/10,000 double? 400m world record holder Wayde Van Niekerk of South Africa attempting for the 200m/400m double? Caster Semenya too over 800m/1,500m? Bitter sprint rivals Dafne Schippers versus Elaine Thompson? Nijel Amos gunning for the 800m title in the absence of the injured David Rudisha? And have you heard of Luvo Manyonga?

What about the Irish hopes?

A small team of 11 – only five on the track: Thomas Barr (400m hurdles), Ciara Mageean (1,500m), Mark English (800m) and Brian Gregan (400m) are all rounding into form, with Barr certainly a potential finalist. Síofra Cléirigh Büttner runs her first major 800m and the experience will stand. Rob Heffernan, the 2013 gold medallist in the 50km walk, is at age 39 back for his seventh World Championships still eyeing the big prize, and is joined by Alex Wright and Brendan Boyce; Sean Hehir, Mick Clohisey and Claire McCarthy run the marathon, an event in itself.

Will the championships be clean?

Of course not, but certainly cleaner than the last few. The IAAF continued blockade against the Russians has helped (although Russia do have some select individuals entered), and the spate of positive retests should scare off a few more. But like crime in society...

What about the TV coverage?

RTÉ are one of only six European nations not to purchase the rights, but of course BBC and EuroSport have blanket coverage, and the IAAF are also providing a live stream via YouTube.

This weekend’s final sessions are long sold out, with some availability for later next week. Check https://tickets.london2017athletics.com/

The men’s 3,000m steeplechase final next Tuesday. Kenya have owned this event but the American Evan Jager now believes otherwise. It could be quite the punch up.