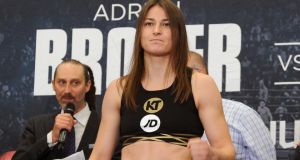 Katie Taylor during the weigh-in for her fight in Brooklyn, New York, against Jasmine Clarkson. Photograph: INPHO/Emily Harney

Katie Taylor’s team are looking at Las Vegas in November for her much anticipated world title bid.

The Irish lightweight, who has won in her first six professional outings, has spoken on numerous occasions about a coming-home fight in Dublin’s 3 Arena for a world title. However, the 31-year-old may have to side with opportunity on the undercard of the rematch of Anthony Joshua and Vladimir Klitschko, which is provisionally pencilled in for November in Las Vegas. Joshua is waiting for Klitschko to sign go-ahead papers.

Taylor fought Germany’s Nina Meinke on the undercard of the first meeting of the two heavyweights in Wembley Stadium at the end of April, a fight that broke all modern day records with 90,000 people attending.

Promoter for the Wembley event, Eddie Hearn, has both Joshua and Taylor in his stable of boxers, with the exposure to an American audience and the platform Taylor would gain from again appearing on a world title heavyweight fight card too good to resist.

In the interim Taylor will be seeking another bout sometime in mid-September. Currently in Ireland for a break, she will return to her training camp in Connecticut at the end of this week with a view of turning out one more time for her seventh professional outing before stepping up to a world title shot.

As ever an opponent has not yet been fixed for her but the manager of Jessica McCaskill (5-1), the number one American lightweight, has been calling out Taylor since last weekend’s win in Brooklyn over Jasmine Clarkson.

McCaskill is ranked third in the Boxing Rec list, with Taylor placed at ninth.

One of the venues Taylor’s team are looking at is in London, where Hearn has a show scheduled in early September.

Sky are also involved in a few US bouts including Luke Campbell’s meeting with Jorge Linares, where the WBA lightweight title is on the line in Los Angeles. Again Taylor has had a good history with Sky, with a bout in the US less disruptive as she is based there for most of the time.

If a world title belt is within Taylor’s grasp, the consolation for Irish fight fans is for a first defence to be staged in Dublin.