Three reasons to be cheerful for the future of Irish athletics 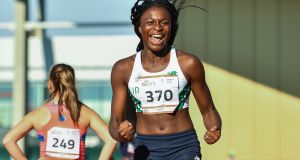 So, even after all the loose talk, still nothing sparks a sporting debate quicker than the subject of nationality. Only if this week’s lesson is anything to go by, what we know and what we think we know can sometimes be two completely different things.

Part of the problem, it seems, is deciphering the difference between what it means to represent your country and what country represents you. It’s always been something of a moveable feast and you only need to run through the current list of Irish runners and cyclists, soccer and rugby players, swimmers, divers, rowers etc to appreciate that.

That’s because nationality, in the sporting context or otherwise, isn’t always decided on strictly fixed terms, and even less so these days. Although for those who do get to compete on the international stage, it should never be decided by something as hideously narrow-minded as the spelling of their name or the colour of their skin.

The sight of three young Irish athletes on the medal podium of European underage sprints championships within the past week was certainly conspicuous, and not just because these are events where in the past most Irish athletes have had to settle on being the also-rans.

Neatly divided across gold, silver and bronze, their achievement, even if at essentially developmental level, was significantly representative of the new generation of Irish athletes.

Indeed each of their journeys into the sport and the now modest success that has come with it have in some way been carefully steered by the Irish athletics system, starting with the gold medal won by Gina Akpe-Moses over 100m at the European Under-20 championships in Grosetto, Italy last Friday.

Three years ago, not long after winning an intermediate sprint double at the Irish Schools championships in Tullamore, Gina Akpe-Moses was beaten. Not once, but twice. And worse still by the same athlete she’d beaten just a few weeks previous.

It was at the Schools Interprovincial championships in Santry. Then aged 15, and already the standout athlete at her school, St Vincent’s Dundalk, and her club, Blackrock AC, Akpe-Moses was gently taken aside by Fintan Reilly, one of her club mentors, and politely told she needed to become more disciplined with her training.

Talent, he told her, would only take her so far. The rest came down to hard work and dedication. Part of the issue there was Dundalk has no running track (and that’s another story), and also her parents, who immigrated here from Lagos, Nigeria when she was three years old, didn’t have the time or resources to be driving her around the country to races and proper training venues.

So Reilly set her up with sprints coach John Shields in Dublin, and from then on, her older sister Joy took her down either by train or bus to the Morton Stadium, twice a week, in order to seek those necessary improvements. Akpe-Moses was determined to make it, and the following summer, made her Irish international debut, winning the silver medal over 200m at the European Youth Olympics over 200m in Tbilisi.

“She’s always been an integral member of our club, and we’ll always see her as a Dundalk person,” says Reilly. “She went to primary school here, then secondary school at St Vincent’s, and her sister Joy did her Leaving Cert there. Education was a big, big focus for the parents.”

Around the same time, the family moved again to Birmingham, and for a while she wasn’t sure how that would work out. Joining up with Birchfield Harriers, and club coach Andy Paul, the move turned out to be a blessing in disguise, given their world-class training facilities, although Akpe-Moses insisted she would continue to race for her club, Blackrock AC, and also Ireland.

“I wouldn’t see myself ever changing country, after so long,” she says. “I think that would feel like a bit of a betrayal if I decided that. I’ve always had great support, great encouragement, from Athletics Ireland.”

By Tuesday afternoon, Patience Jumbo-Gula, another young Dundalk athlete from the St Gerard’s club, and also at school at St Vincent’s, had won the bronze medal in the 100m at the European Youth Olympics in Gyor, Hungary, at age 16, her marginally wind-aided 11.59 seconds actually faster than what Akpe-Moses ran to win gold.

Not long after crossing the line, Jumbo-Gula was embraced by Irish team-mate Rhasidat Adeleke, who runs with Tallaght AC and last month won a junior sprint double at the Irish Schools championships running in the colours of Presentation Community College in Terenure. Adeleke is still just 14, very young even by Youth Olympics standards, yet came out on Thursday afternoon and won the silver medal over 200m, also with a slightly wind-assisted personal best of 23.81 seconds.

What both unites and perhaps sets apart these three is the fact they’ve never known themselves to be anything other than an Irish athlete. Which also makes them completely separate to the debate over the transfer of allegiance, and why the IAAF froze their rule on that earlier this year such was its widespread abuse or at least lack of respect.

What they also represent is that ever-increasing percentage of the Irish population which comprises foreign nationals, their success of the past week not just a natural progression for Irish athletics but surely soon something all of Irish sport can learn from.

1 Seán Moran: Boylan documentary offers a compelling insight into former Meath boss
2 Gerry Thornley: Irish system to face its acid test in front-loaded return
3 Stirling and Balbirnie tee off to tee up another famous Ireland win over England
4 ‘A win like that is special and one we’ll remember forever’ - Ireland skipper Balbirnie
5 FAI ‘will come down hard on clubs’ that flout Covid-19 restrictions
Real news has value SUBSCRIBE