Angling Notes: great time was had by all at Lake of Menteith in Scotland

The 700-acre lake is divided into two and holds a large stock of rainbows, blues and browns, and also pike, perch, bream and tench 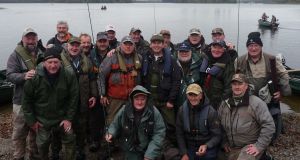 The Irish group at Lake Menteith in Scotland

Surely there is no better way to spend a week-long trip to the Lake of Menteith in Scotland than at the conclusion of our fly fishing season? Psychologically or not, it does tend to shorten the four-month wait for the 2020 season to begin.

This year’s trip was my third and undoubtedly best so far. Along with 17 fellow anglers we made our way by car to Belfast for the ferry to Cairnryan, driving through Ayrshire and onward to the Rob Roy Hotel, near Aberfoyle in Sterlingshire.

The Trossach village of Aberfoyle, Lake Menteith and the Rob Roy (our stay for the week), are all within 10 minutes drive of each other. Perfect, from an angling perspective.

The hotel opened in the 1940s, and during the second World War was requisitioned by the War Office to accommodate prisoners of war. Up until 1959 the Glasgow-bound train stopped here. however, the track is now transformed into a walkway to Aberfoyle.

Lake Menteith beckoned. and I couldn’t wait to get going. Wild and wonderful, full of character and wildlife and, hopefully, plenty of those “big ones”. Facilities at the fishery are first class with a large car park, lunch room, tackle shop, toilet and changing room.

Surrounding landowners secured fishing rights of the lake in 1966, and with fish farm attached developed Menteith into one of the most successful put-and-take fisheries in Europe.

There are 34 boats and two wheelies, each equipped with outboards and drogues ready for the 9.30am start each morning. Fishery manager Quint Glen and assistant Connor Shearer look after the needs of the daily influx of anglers.

The 700-acre lake is basically divided into two with a narrow bit in the middle, and holds a large stock of rainbows, blues and browns, and also pike, perch, bream, tench and dace.

“During the winter months I intend to stay open and reduce boat numbers to 10 per day, provided the business is there,” Glen said.

For the latter part of the summer the lake was plaqued with an algae bloom, quite dense in parts similar to “pea soup”. According to Glen this is mainly caused by fertiliser run-off from two farms situated close to the lake.

However, following scientific testing the algae was proven to have no negative effect on fish or, indeed, on the anglers.

On the fishing front we were blessed with good weather and the fishing was superb. Boobies, cormorants, buzzers, snakes and blobs on midge tip were to the forefront to entice those extremely strong rainbows, blues and browns, all between 1kg and 3kg. Fantastic sport and all safely returned.

Special thanks is extended to Michael Linehan for organising the trip to ensure all had a really enjoyable fishing break. Not an easy task by any means!

The 14th edition of the Waterways Ireland Erne Pike Classic took place from Friday, October 11th, to Sunday, October 13th, on the river Erne at Enniskillen. The competition included a one-day bank event with the option to fish two days by boat, attracted pike anglers from across Ireland to compete for a prize fund of £12,275 (€14,244).

The calm but wet conditions on a swollen Erne produced a record number of pike in double figures with a total of 24 fish over 16lb recorded. The largest specimen reached 21lb.

The bank match saw 76 anglers take to the various town sections to fish. In first place, with a specimen of 18lb 11oz, went to Tyrone angler Cahir McGovern, who received €1,000, followed by Andrew Dundon from Fermanagh on 17lb 8oz (£500) and in third place, Niall Ward, also from Fermanagh, with a fish of 16lb 8oz (£250).

The two-day boat event attracted 145, fishing out from Bellanaleck or Round ‘O’ for their chosen positions. Roaming stewards at a number of locations were kept busy weighing the many catches.

Martin Dempsey from Dublin landed the best fish on day one at 20lb 12oz, followed by Peter Black from Armagh on 18lb 8oz, and close behind local angler Gabriel Hanley on 18lb 4oz.

The quality of catches on day one was so good that the bar was set at 13lb 10oz in 18th position, meaning smaller fish on the second day were not required to be landed.

Everyone took to the water on Sunday hoping for a sizeable fish to top 20lb 12oz. Success came for Armagh angler Hugh Malone with a fine fish of 21lb to win the competition and lift the Mark Lichtenberg Cup and £2,000 prize fund. Martin Dempsey and Peter Black held their positions from day one to win £1,500 and £1,000 respectively.

“This is a great competition and well organised, the welfare of the pike is paramount, and all fish were returned unharmed. I would recommend it to everyone. Thanks to the organisers,” said an elated Malone.

Incredibly, 300 fish were caught that did not make the minimum weight requirement, with over 70 fish weighed. Sunday showed the quality of catches to be had when the lowest weight to make the leader board was 16lb.

The event concluded at the Killyhevlin Hotel where Cllr Diana Armstrong, vice-chair of Fermanagh & Omagh District Council, presented the awards.

The Erne Pike Classic is sponsored by Waterways Ireland and hosted by Erne Anglers AC in conjunction with Daera, Inland Fisheries and Fermanagh Omagh District Council.

Despite poor attendance the €1,000 target was surpassed thanks to all in attendance and the match sponsors. Fishing was tough and methods varied, but four bonus bream secured the match for Nick Richards with just over 7 kilos from the Grassy Bank peg.

The Lower River Bann and Mid Ulster Council’s newly-enhanced facility was the venue for this years’ All Ireland Youth Feeder Fishing Championships in the under-15 and under-25 categories.

Pegs at the new “bridge” section at Portglenone produced roach and some perch from a fast running and almost clear river. Charlie Richards had the top weight with 3.980kg to win the U-15 section. In second place was Jay Taylor with 1.820kg followed by Harry Speers on 1.440kg.

Erne angler Paddy Connolly won the U-25 category with 2.929kg, followed by Jordan Hall with 2.360kg and Aaron Galbraith with 2.060kg in third position.

Trophies and medals were presented along with top prizes to include rods and reels from Tubertini UK Ltd. Licenses and permits were provided compliments of Daera, Inland Fisheries and The Honourable Irish Society.