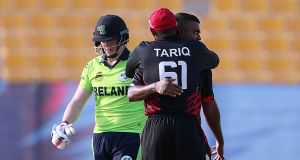 Ireland put their backs firmly against the wall at the T20 World Cup Qualifier in Abu Dhabi after going down to a 10-run defeat to Canada that puts their chances of qualifying for next year’s tournament on a knife edge.

It was Ireland’s second defeat in the tournament after also losing to hosts UAE last Saturday and means Graham Ford’s side must win there final games against Jersey on Friday and Nigeria on Saturday to stand any chance of making the playoffs.

Four teams will qualify for next year’s finals in Australia from the Qualifiers, with the sides topping each of the two groups going straight through to the semi-finals of this tournament while also booking their tickets down under.

The teams that finish second and third in each group will meet in playoff matches, with the winner of each going on to the semi-finals and also advancing to next year’s finals tournament.

Ireland are presently fourth in Group B on four points, with Jersey on the same mark but with a better net run rate after they were beaten by a Hong Kong side coached by former Ireland captain Trent Johnson.

Ireland’s meeting against the Channel Islanders on Friday will now prove key and skipper Gary Wilson believes his side must improve across the board if they are to stand any chance of progressing after the failed to chase down a target of 157 against Canada at the Sheikh Zayed stadium .

With Andrew Balbirnie returning to the side after missing the win over Oman through illness, Ireland lost the toss and were asked to bowl first.

Canada started well, until speedster David Delany knocked back opener Rizwan Cheema’s stumps with his first ball. Delany, despite the sapping heat, was clocked at more than 90 miles per hour during his spell, and made the opposition batters uncomfortable at times with his raw pace.

Canadian captain Navneet Dhaliwal (69 from 51 balls) then took charge – hitting out with a combination of power shots and well-placed glides. He brought up his third career half-century from 37 balls, sharing an impressive 111-run stand with Nitish Kumar (53).

While giving his team a great launch pad for the final overs – with the score on 124 for two with five overs to go, his dismissal gave Irish bowlers a sniff of a way back into the game. And the men in green capitalised.

The last five overs saw four wickets fall for just 32 runs, with Canada ending on 156 for five from their 20 overs.

For Ireland, Boyd Rankin bowled well claiming two for 31, but the best bowling performance of the day was Mark Adair, who went wicketless but bowled a miserly none for 21 from four overs. Using clever variation and a tight line, Adair bowled at the top and tail of the innings and ensured the Canadian batters never got away.

In response, Ireland started poorly by losing Kevin O’Brien early for four, but looked to rectify the innings through a rapid 38-run stand between Paul Stirling and Gareth Delany (16).

The dismissal of Delany, run out after great fielding by Nitish Kumar at backward point, was quickly followed by the big loss of Balbirnie for a first-ball duck. Ireland needed talisman Stirling to stay in and build around, but soon after he tickled a ball through to the wicket-keeper and was out for 23.

A seemingly stabilising partnership of 29 between Harry Tector (22) and Wilson (16) sought to get the Irish run chase back on track. However, the Canadian bowlers continued to plug away and wickets further came. Tector and Wilson fell within two runs of each other, and the brakes were applied to the Irish run rate. Mark Adair (12), Stuart Thompson (28 not out ) and George Dockrell (13 not out) found late runs, but the target proved too difficult and Ireland fell 10 runs short.

“At half-time they were probably 10 runs or so more than we would have liked, but we still felt we could chase them down. But as we saw, it can be difficult to chase when teams put the squeeze on,” said Wilson.

“We thought we wanted to target the powerplay and put Gareth Delany up to three. But the run out, followed by Andrew Balbirnie going first ball put the brakes on us a little bit. We recovered okay, but when Harry [Tector] got out, we never really recovered from that.

“I thought Mark Adair was outstanding with the ball, helping to drag it back - as he has been all tournament, but ewe’ve unfortunately now got to go the hard way and rely on results elsewhere. They’re all must win games for us now.”