America at Large: Belichick and Cody both driven by a singular passion 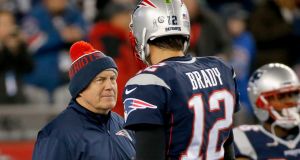 On his second day as a New England Patriot, Brian Hoyer attended a team meeting where Bill Belichick opened the film session by showing lowlights from training.

He started with footage of iconic quarterback Tom Brady making a mistake, trying to force a 30-yard pass instead of taking an easy five yards for first down. It wasn’t just that he chose to open the review with a brutal attack on his best player. The content of the critique and the tone of his delivery mattered too. If the coach could speak like that to Brady, Hoyer realised, everybody was fair game.

The canon of stories about Belichick’s willingness to castigate Brady in front of his peers is thick and growing, part of a burgeoning legend. When the Patriots take on the Atlanta Falcons in Super Bowl LI in Houston on Sunday, Belichick will be making his seventh appearance in the decider and trying to win his fifth, something no NFL coach has ever done.

What makes his record truly remarkable is this team has been contending almost annually for 15 seasons in a league specifically designed to ensure parity so every club has a chance to compete.

He has managed this feat while studiously eschewing the spotlight, creating a rigorous culture where no individual is bigger than the team and fostering the belief that every player can be replaced.

In a sport where me-first characters have destroyed plenty of more talented locker-rooms, two generations have bought wholeheartedly into this ethos. When you summarise it like that, the approach sounds remarkably familiar. His record might not quite stack up to Brian Cody’s 11 All-Irelands since 1998 but in terms of demands made of players, deliberately low-key managerial style and a persistent reluctance to suffer fools, there are uncanny similarities.

Read about the intensity Belichick promotes at every training session and it reminds you of Cody’s famously unforgiving training matches at Nowlan Park and his statement: “the training pitch must be a centre of excellence”.

Run your finger along his determination that the hunger for glory must never be sated by the trappings of success and it reeks of the Kilkenny manager somehow preventing his charges dwelling on past triumphs.

Listen to the Patriots’ mantras, “Next man up!” and “Do your job!” and they perfectly capture the pragmatic way a schoolteacher 3,000 miles away built his own contemporaneous dynasty in a very different code.

It can be argued these are traits common to successful coaches and managers in every sport. But there’s more to the comparison than that. The longevity of their reigns in uniquely challenging eras in terms of media attention and social distractions. The ability to lose key figures and to seamlessly plug in their replacements in every single campaign while continuing to win.

And, perhaps most impressive of all, the fact neither seems to be want to be the star of their own movie. Unlike, say, Alex Ferguson or Jose Mourinho, this duo never evince any interest in being the story before or after a big game.

That lack of interest may be because they both also seem utterly unimpressed by the media and its [to them] curious ways. While he could hardly be described as effusive, Cody comes across as almost genial when measured against Belichick, a character whose default setting in press conferences is stuck somewhere between taciturn and just plain ignorant.

There are, of course, other differences between the two men too.

Although he played lacrosse and football at Wesleyan College, Belichick was never an elite athlete like Cody and he started his coaching career at the very bottom of the ladder as a video assistant with the Baltimore Colts earning $25 per week.

Perhaps befitting somebody who made his name obsessively analysing film, Belichick is notorious too for forensic game planning, something that would be anathema to the greatest hurling manager of all with his professed disdain for “tactics”.

When he arrived in New England in 2000, Belichick’s only previous head coaching job had been an unimpressive stint with the Cleveland Browns and the suspicion was he might be more suited to the role of career assistant.

Cody took over Kilkenny two years earlier, having won nothing of significance during his time in charge of James Stephens and with no great fanfare about the appointment or his potential. Both men were similarly blessed with excellent timing, each coming into the job just as a talent for the ages was coming on stream.

Cody’s fortunes were almost synonymous with Henry Shefflin’s from the moment he gave him his debut in 1999, and that he managed to add another All-Ireland after the retirement of his talisman only burnished his reputation more.

Belichick drafted the unheralded Tom Brady in 2000, slotted him in for the injured Drew Bledsoe a year later, and transformed the Patriots from also-rans to serial winners who now stand on the cusp of making history. A place Cody knows only too well.