America at Large: Johnson will need all his ‘Magic’ to make Lakers great again 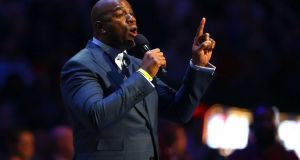 Earvin ‘Magic’ Johnson: “It’s not about what I did when I played. It’s about the new Lakers.” Photograph: Elsa/Getty Images

After the floundering Los Angeles Lakers unveiled Magic Johnson as the team’s new president of basketball operations, Dan Le Batard, a talk show host, ranted about the appointment. He reckoned the decision to charge Johnson with the sizeable task of rebuilding what was once the NBA’s flagship operation owed more to his fame and charm than to his actual ability.

The owners had overlooked several better-qualified candidates because, according to Le Batard, Johnson’s name evoked memories of “Showtime” the era when he bestrode the club and the sport.

As critiques go, it seemed logical enough. At the tail-end of his reign as perhaps the greatest point guard ever, Johnson had a short-lived, Shearer-esque stint as the Lakers’ coach when they lost 11 out of 16. In the 23 years since, he’s enjoyed a varied, often spectacularly successful career but none of his achievements have had anything to do with basketball.

Indeed, during a foray as an analyst on television, he often came across as ill-informed and out of touch. For daring to highlight this rather crucial shortcoming, Le Batard, a Cuban-American, has had to battle frankly bizarre accusations of racism.

Those lambasting him for questioning Johnson’s credentials assert that winning five NBA titles as an iconic player in the 1980s somehow makes him the perfect man to oversee a long-term rebuilding project that may take until 2020 to complete. That seems crazy logic no matter the sport.

Saddled with dud contracts from the previous regime, the Lakers are several canny draft picks and box office free agent signings away from even contending. Against that background, opting for a throwback rather than a cutting edge appointment seems motivated more by gaudy sentiment than sports science.

The size of his legend and the fans’ eternal capacity for romance ensures there are plenty who believe he can pull this off. Their faith is perhaps inevitable because his has been a sporting life like few others. The greatness that defined him on the court, both in college and then as a Laker, is only half his story.

In revealing his HIV-positive status in November, 1991, Johnson evinced extraordinary bravery, especially in a time of so much ignorance and stigma that some of his own team-mates actually feared they would contract AIDS just from sharing a ball with him.

In the years that followed and the decades since, his every outsized move has served to shatter people’s perceptions about the condition. He didn’t just survive, he thrived, and in so many different arenas to the one where he made his name.

Using his celebrity status to gain initial meetings with some of the biggest corporations in America, many of the CEOs having been courtside regulars during his heyday, Johnson had an innovative approach to business, building cinemas and restaurants in neglected urban areas that many blue chip companies had deemed a risk too far.

“I get asked if I’m trying to help minorities or make money,” said Johnson who was once involved enough in more than 100 Starbucks outlets in African-American neighbourhoods that he personally tweaked the menus. “My answer is, I’m trying to do both.”

Over time, his ambitions grew (he owned a share of the Lakers after retiring) and today, his rather diverse portfolio includes a stake in the Los Angeles Dodgers’ baseball team, a chunk of Los Angeles FC, the city’s new MLS team, and a piece of a professional eSports outfit. Those are only his sporting ventures.

Among his other interests are a Marvel theme park, a television network, a life insurance corporation and a publishing company. It’s an impressive resume notwithstanding the troubling fact he’s also made money endorsing predatory lenders who specifically target impoverished sectors of the African-American community, charging customers ludicrous interest rates.

In an honest appraisal of where they currently stand and how far they have to go, he’s admitted none of the present roster would have made the title-winning squads he played on in the 1980s. A much more immediate concern than winning championships is trying to figure out a way to become a playoff team again.

Johnson’s first major move was textbook, trading Lou Williams, the team’s leading scorer who was coveted by a few contending teams, to the Houston Rockets in return for a first-round draft pick and Corey Brewer.

This is where the Lakers are now and for the foreseeable future, getting rid of quality contributors that could help them win today in order to build a better tomorrow. A reconstruction project that requires cunning, patience and an eye for the main chance, the very qualities it’s worth noting that defined him as a point guard and a businessman.

“It’s not about what I did when I played,” said Johnson. “It’s about the new Lakers.”

Which many hope will be just like the old Lakers. His Lakers.

Walk tall, golfers, and tell Leo that golf is not the enemy at the gate 06:35
Mick’s millennium: McCarthy clocks up his 1,000th game as manager 06:00
The interpros give players a chance to prove the coaches wrong 06:00
Pro14: Munster-Connacht rivalry set to take on a sharper edge 06:00
Indoor Championships draws record number of athletes despite pandemic 06:00