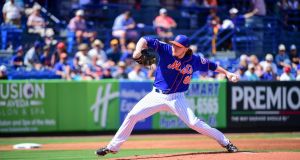 PJ Conlon during a Spring Training game between the Houston Astros and New York Mets in February. Photograph: Getty Images

Belfast-born PJ Conlon will become the first Irishman to play Major League Baseball in over 70 years on Monday night when he starts for the New York Mets against the Cincinnati Reds. Below is a republished column from Dave Hannigan on the 24-year-old left-hand pitcher.

They gave Joe Cleary the nickname “Fire” because he threw the baseball so fast in high school. Sometimes, to turn a buck for his struggling immigrant family during the Depression, he brought the heat as a ringer for the semi-pro Puerto Rican Stars, the pseudonym Jose Hernandez made risible by a shock of red hair, piercing blue eyes and the lingering vestiges of a faint Cork accent. His journey through the foothills of the minor leagues was interrupted by World War II and a stint in uniform but in August, 1945, he finally got a call-up to the majors.

In the fourth inning of the second game of a double-header against the Boston Red Sox, the Washington Senators’ coach Ossie Bluege sent Cleary in as a relief pitcher. At 24 years old – not much more than a decade after he and his family had sailed from Ireland to New York and an aunt had brought the new arrival to Yankee Stadium to marvel at Babe Ruth – he now finally had his chance to show what he could do.

By the time he trooped off the field nine batters later, however, he’d earned an unlikely entry in sporting folklore.

At the end of any athletic career, most people are fortunate if they get a footnote in history. Cleary gets three. Not all are accolades he might have wanted. With his ignominious cameo that day at Griffith Stadium, he became the last Irish-born player to tog out in the major leagues, a place where Irishmen were once so dominant it was believed they must have some sort of genetic advantage for the sport.

His disastrous performance also earned him the highest Earned Run Average (ERA) of any pitcher who ever made an out (not a good thing). And he was replaced in this, his one and only appearance in the show, by Bert Shepard, another recently de-mobbed soldier playing on one leg and a prosthetic.

Long forgotten by all but the baseball anoraks who relish the quirkier entries in the record books, Cleary has been rescued from obscurity by the emergence of PJ Conlon.

A 23-year-old native of Belfast, Conlon may just be the next Irish-born player to make it to the majors. Having been voted the New York Mets’ minor league pitcher of the year in 2016, the left-hander’s presence and his form have turned him into one of the feel-good yarns of this baseball pre-season.

In his first two appearances, Conlon didn’t give up a run. A promising statistic for a rookie but the outsized media coverage of his arrival probably has more to do with his unique backstory than his undoubted potential. “Mets prospect took to pitching after the Troubles were left behind” went the headline in the New York Times last week.

Born in Belfast 12 days after the Greysteel Massacre in 1993, the son of a Catholic father and a Scottish Protestant mother who converted, he spent the first two years of his life on Rockville Street off the Falls Road. His parents, who had both spent time in America in their youth, eventually decided California’s Orange County (ironically enough) offered greater opportunities for their nascent family.

When the child subsequently demonstrated an aptitude for baseball, his father Patrick, who played soccer for the University of California, Fullerton, began learning more about the national pastime, often by playing video games with his son.

“I didn’t know being left-handed was such an advantage in baseball,” said Patrick Conlon. “But I probably know more about baseball now than I do about soccer.”

Spring training is baseball’s curiously elongated version of a pre-season, a two-month stretch when clubs gather their best and brightest together in warmer climates to prepare for the new campaign. Conlon’s invitation to this year’s gathering was a measure of how well he has performed since being drafted out of the University of San Diego.

He’s already done enough to fuel talk he could make the major league bull-pen (pitchers called in to relieve the starters late in games), if not for opening day, certainly at some point over the summer.

“I’ve always wanted to prove not only to myself but to people growing up that this was something I could do,” said Conlon. “I feel like I can get big league hitters out and I’m just in the process right now of polishing everything and being ready for that step.”

To make the last, giant step up, he must continue to prove that, in the absence of overwhelming arm speed, he has the variety of pitches and the smarts to shut down the best sluggers. To stay there, of course, he will have to avoid the fate of Joe Cleary whose ability to throw the ball deserted him on the very day he needed it most, a treason that defined the rest of his life. He ended up running a bar on New York’s West Side where his brief flirtation with the big time was fodder for every wiseacre with drink taken.

“I take an awful needlin’ about that, that one appearance,” Cleary once told author Brent Kelley for his book ‘The Pastime is Turbulence’. “The main thing I get kidded about is the earned run average; it’s the highest in major league history, you know. But I always say to them, ‘I was there.’”

He was there. And Conlon may soon be too.