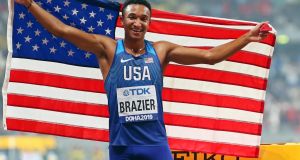 Donavan Brazier of the USA celebrates after winning the men’s 800m final at the IAAF World Athletics Championships at the Khalifa Stadium in Doha, Qatar. Photograph: EPA

Wow. Of all the nights to produce to a World Championship best performance in the men’s 800 metres – and a first gold medal winner in the event for the USA.

Because the problem with any anti-doping violation is it leaves a trail of association. There was no sight or sound of Alberto Salazar around Doha on day five, only those athletes associated with him, beginning and not ending with the men’s 800 metres final.

For Salazar, a statement overnight from the US Anti-Doping Agency confirmed the Nike Oregon Project (NOP) head coach was banned from the sport for four years, effective immediately, for multiple anti-doping rule violations: Salazar’s Doha accreditation was immediately revoked, and all his athletes told by the Athletics Integrity Unit (AIU) they can no longer have any association with him.

Two of those athletes later lined up for men’s 800m final, and even without any anti-doping violation whatsoever next to their name the association was suddenly unavoidable: last October, US 800m champion Donavan Brazier joined the NOP, the 22-year-old the latest rising American distance runner to join the Portland, Oregon-based training group; 2016 Olympic bronze medallist and two-time US 800m champion Clayton Murphy signed with the group in 2017.

There was always going to be unheralded champion in this event: none of the eight finalists from London two years ago made the final. But even in the absence of former two-time champion and world record holder David Rudisha from Kenya, it was Brazier who produced the fastest 800m in World Championship history to take the win in a 1:42.34 – the super-fast two-lap race set up by Wesley Vázquez from Puerto Rico, who paid a price for his early effort when fading on the homestretch to fifth, in 1:44.82.

Silver went to Amel Tuka from Bosnia and Herzegovina in 1:43.47, the Kenyan Ferguson Cheruiyot Rotich third in 1:43.82, with the other American and NOP athlete Clayton Murphy eighth 1:47.84

It’s unclear what impact, if any, the Salazar charges had on Brazier: he’s not directly coached by Salazar at the NOP group either, but by NOP assistant Pete Julian, his move to the Nike outfit also coming at a time when any anti-doping violations were still nothing more than association.

Only not now. Salazar was found guilty of “orchestrating and facilitating prohibited doping conduct” as head coach of the Nike Oregan Project (NOP), a camp designed to develop US endurance athletes, and where Britain’s Mo Farah moved to train in 2011, before beginning his global dominance.

Salazar immediately dismissed the findings and announced his attention to appeal. Nike have insisted that the ruling has nothing to do with any athlete involved in the NOP.

The news broke four years after the United States Anti-Doping Agency began its investigation, two years after the agency’s report was leaked online, and two days after Dutch and NOP athlete Sifan Hassan won 10,000m gold. It means that Salazar association will run into day six too and the women’s 1,500 heats; Hassan will attempt an unprecedented 1,500m-10,000m double, and is drawn in the same heat as Ciara Mageean (3.35pm Irish time); Mageean has a best of 4:01.21 over the distance. Hassan ran the last 1,500m of her 10,000m final in Sunday night in 3:59.

In a statement, Hassan removed herself from any association of the charges, saying “this investigation is focused on the period before I joined the Oregon Project and therefore has no relation to me” and added: “I am saddened by the timing of USADA as it brings my championship out of balance but I will focus all my energy on my next race and my performance in the 1500m. A race that I have worked hard to prepare for and am very excited to race in hopes of winning my second World title.”

With some gentle irony, the final track event of the night, the men’s 200m, was one by an American athlete with no anti-doping association whatsoever. Noah Lyles has lost just one race since finishing fourth at the 2016 US Olympic trials out of high school, and lived up to his billing as the Next Big Thing in the event to take the win in 19.83.

Lyles, sporting a Dragon Ball Z-inspired silver hair, didn’t have it all his own way, Britain’s Adam Gemili pressing him hard around the bend before fading to fourth to in 20.03, visibly gutted; Andre De Grasse from Canada won another silver in 19.95, with Alex Quiñónez from Ecuador taking silver in 19.98.

A third gold medal for the USA on the night went to Sam Kendricks in the pole vault, his best of 5.97 enough to hold off Swedish teenager Armand Duplantis.