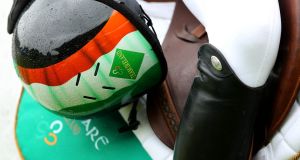 The Ballindenisk international horse trials were held in Watergrasshill, Co Cork over the weekend. Photograph: Inpho

In a sport where women and men compete on equal terms, the former came out on top at the weekend’s Ballindenisk international horse trials in Watergrasshill, Co Cork, winning five of the eight classes including the top-rated CCI4*-L competition.

Here, British riders filled the top six places headed by Ros Canter who led from start to finish with Allstar B (27.6 penalties), the horse on which she won individual and team gold at the World Equestrian Games in North Carolina last year. Canter, who had just the one ride at the event, was having her first international outing since the birth of her daughter Ziggy in July.

Best of the Irish in seventh in the 22-runner class was Michael McNally riding Eclipto (61.4). The Co Meath rider missed almost five months of the season through injury.

Holly Woodhead had a mixed weekend with her four rides but, on her first trip over to Ireland this year, won the Eventing Ireland CCI2*-S class on Benicia B (25.8). Just .1 of a penalty point adrift in second was Elizabeth Power on Sarah Hughes’s Shannondale Mari, a recent addition to the Co Meath rider’s yard and one with which she has been selected for the World championships for young event horses in France next month.

Based in England for much of the year, the USA’s Liz Halliday-Sharp brought four horses across to Ballindenisk which she had sourced through the Co Wicklow operation, Cooley Farms. She was placed on all but one, winning the R. Nesbitt Paddock Equipment CCI1*-Intro class with the six-year-old Cooley Seeking Fortune (27.4).

While not carrying international status, the Michael Leonard five and six-year-old championship did attract one English competitor, Amy Tough, who finished sixth on Volentieri (34.3), one of five horses she brought over for the event.

Ennis’s WEG teammate, Cathal Daniels, won the 44-runner CCI2*-L class with OLS Queen Bee on which he was leading after the first day of dressage (26.5) only to be beaten into second at the end of that phase by Britain’s Izzy Taylor on Briarlands Sweetango (25.6). However, while Taylor picked up eight penalties in the show jumping ring, Daniels was clear within the time on both jumping phases.

OLS Queen Bee, a six-year-old mare by Luidam, is owned by her breeders, Michelle Nelson and Kieran Connors, at whose Orchard Lodge Stud in Co Kildare, Galway native Daniels is based. This was a good end to September for Daniels who started the month by claiming the individual bronze medal at the European eventing championships in Luhmühlen, Germany on another mare, Rioghan Rua.

England-based New Zealander James Avery landed the CCI4*-S on One Of A Kind II (31.2) with the in-form Taylor placing second on Fonbherna Lancer (35.1). Elizabeth Power was again best of the Irish here when finishing third on Samuel Thomas II (36.7).

Avery partnered La Chunga (41.4) to finish sixth in the CCI3*-S which was won by Britain’s Oliver Townend riding Alcatraz (29.5) ahead of the USA’s Halliday-Sharp on Cooley Moonshine (33.5). Best of the home-based competitors in 10th was Co Meath’s Lexi Kilfeather on her mother Everina’s Lord Of The Morning (49).

In dressage, Co Kildare’s Heike Holstein increased her record of National Championship titles to 13 when partnering the home-bred mare Sambuca to win Saturday evening’s Grand Prix at the Slieve Bloom Stud/Dressage Ireland national championships which were held over the weekend at Cavan Equestrian Centre.