A story of Muhammad Ali, a tiny truck stop and an epic road trip 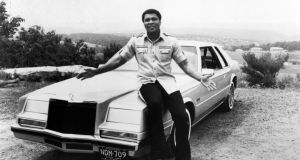 In April 1983 Muhammad Ali set off on an eventful roadtrip. Photo: Getty Images

A tale of two small towns and the champ.

Standing in the Smoky Hills of the Great Plains of Kansas, the population of Bunker Hill goes up and down but never strays too far north or south of 100. Flush by Interstate 70, the 2000-mile highway that runs east-west, bisecting middle America, it’s a glorified truck stop, long-haulers lured off-road by the Bear House Café, offering hearty fare and an entertaining backstory. Its name derived from a pair of caged animals that reputedly once stood sentry from their perch in the gas station next door.

On April 13th, 1983, Lee Modlin turned up for her first ever shift waiting tables at this roadside landmark. That was the Wednesday morning when Modlin, patrolling the counter, notebook and pencil in hand, discovered Muhammad Ali sitting there next to his secretary/bookkeeper Marge Thomas. Seventeen months into his final retirement from the ring, he held no official world title by then except that of most famous athlete on earth. And, perhaps, most genial too.

“I about died,” she said. “He was real nice and real sweet.”

Soon, diffident truckers and shy kids pressed into service by starstruck parents were milling around the boxer proffering snatches of paper and pens, requesting autographs. As was always his wont, the bigger the audience got the more animated Ali became, eventually ignoring his freshly-delivered soup and climbing out of his seat to shadowbox the more courageous customers, offering combat tips to some, savage put-downs to others. Just how he came to be the lunchtime entertainment at the Bear House Café was a typically Aliesque adventure.

Since his lacklustre defeat by Trevor Berbick in December, 1981, his post-boxing life had been a bizarre amalgam of philanthropy, litigation and dodgy commercial ventures. Amongst other engagements, there was a summit with Pope John Paul II at the Vatican, a lawsuit seeking to recoup $1,170,000 that the dastardly Don King owed him from the Larry Holmes fight in October, 1980, and a $44m 600-room hotel project in Virginia Beach where the co-investors included a fake sheikh, an alleged mobster and a crooked investment banker.

But, in early April, 1983, Ali had fetched up in Chicago on more significant, ground-breaking business. There, Harold Washington was attempting to become the first black mayor of the city. Throwing the full weight of his celebrity behind the candidacy, the three-time heavyweight champion kissed babies, posed for photographs and drew large, excited crowds wherever he stumped. Once Washington was confirmed the winner, it was time for Ali to head back to his home in Los Angeles and, in a move that would be unthinkable for any athlete of his wattage today, he decided to drive there cross-country.

Accompanied only by Thomas, a wily accountant who had turned around his traditionally porous and sometimes parlous finances, he set off on this epic trip in his 1978 Stutz Bearcat. Not the kind of vehicle to promote anonymity. Strikingly silver gray in colour, the chrome features on the exterior were reported to be gold-plated and it had cost him well over $100,000 (around $300,000 in today’s money). The preferred ride of the rich and famous in that era (Evel Knievel and Elvis Presley were also fans), the Bearcat was flash, fashionable and, under the circumstances of an odyssey through flyover country, prone to be faulty.

They were just outside Bunker Hill when the water pump went. While mechanics, including Modlin’s husband, at the Tri-States Truck and Trailer sales and repair shop, worked to get the car back on the road. Ali had no idea where he had stopped. When the locals informed here their tiny hamlet was 400 miles from Denver, he shook his head and declared, “Man, I’m right in the middle of nowhere!” That he was.

Twenty-four hours later, the water pump gave up again so Ali and Thomas pulled into the Colorado mountain community of Silverthorne (pop, 3000) when they saw a Chevron sign. For the second day in succession, he went in search of a mechanic and wreaked a little havoc. Brad Johnson was at the news desk of The Summit Sentinel that morning when he got a tip-off. He was so dubious about the story that when he arrived at the garage, the first thing the reporter asked was, “This may sound stupid, but is Muhammad Ali here?”

Johnson found him in the service area doing his usual routine, sparring, trash-talking, putting on a show. He posed for photographs with Keith Bouma, the man working on his car, warning him, “That’s the closest you’ll ever get to laying a hand on me!” When it became apparent the water pump repair was going to take time and the remote gas station wasn’t going to yield any sizable audience for his antics, Ali agreed to visit the nearby Summit High School.

Hundreds of students were brought to the gym for a question and answer session, during which Ali announced grand plans to bring 300 kids on a 15-nation tour to promote the fight against world hunger, and then wowed them by unfurling a wad of $100 bills. Afterwards, he returned to the garage, climbed into the Stutz Bearcat and declared, “The way things are going, I’ll only get another 300 miles before I’ll have to pull over again.”

Then he headed west down Interstate 70, leaving Silverthorne, like Bunker Hill, with just the memory of one special day in his orbit.