America at Large: Trump goes to Lou for fitness and health advice 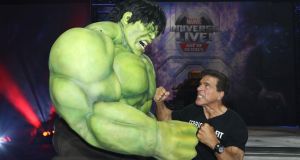 The Incredible Hulk and Lou Ferrigno at a celebrity red carpet event in Los Angeles, California, in 2017. Photograph: Getty Images

In an otherwise long-forgotten episode of Celebrity Apprentice, Lou Ferrigno, the bodybuilder turned actor, got into an argument with Lisa Lampanelli, a comedian and fellow team member who had dismissed him as “a f**king loser” during the course of a challenge.

“Lisa’s lucky that she’s not a man,” said Ferrigno. “If she was I’d throw her right through that window.”

When he repeated the threat a couple of moments later, specifying the wall instead of the window, Lampanelli expressed alarm. It was then that Donald Trump, sitting across the boardroom table, finally spoke, “I’ll protect you Lisa, I’ll protect you!”

The faux-chivalrous knight proceeded to fire the behemoth for incompetence rather than threatening violence even as the man formerly known as The Incredible Hulk” pled rather pathetically for one more chance. Reality television at its most obvious, mediocre and wretched, a squalid demi-monde of B- and C-listers striving to extend their 15 minutes.

That was then. Now Trump has just appointed Ferrigno a member of the president’s Council on Sport, Fitness and Nutrition, a body established by Dwight Eisenhower in 1956 with the expressed purpose of helping Americans lead healthier lifestyles.

Of course, the current incumbent of the White House has named a typically motley crew for his term. It includes Bill Belichick, the most successful coach and most notorious rule-bender in NFL history; Herschel Walker, a former running back who once threatened to kill his ex-wife; and Dr Oz, a television show quack recently exposed as a snake-oil salesman for peddling fake weight-loss pills. And Ferrigno, a name that still curiously resonates.

In the one-channel gulag that was most of Ireland in the late 1970s, there were few more compelling figures of fascination than the 6ft 5in, 21 stone muscleman who turned our screens green as The Incredible Hulk each week.

We didn’t tune in to watch Bill Bixby’s nuanced portrayal of a compromised scientist tortured by his own experiment, no, we waited for the pivotal moment in every episode when he morphed into his alter ego. Primitive though the special effects may have been, Ferrigno shredding clothing just by flexing his pneumatic biceps and tensing his cantilevered thighs never failed to childishly thrill, especially since it usually prefaced him dispensing some sort of rough justice to ne’er do wells.

In those more innocent times it never behooved us to wonder how a lad from Brooklyn with a serious hearing problem might have come upon such a freakishly engorged body. We probably assumed it to be the culmination of years of healthy eating and hard work in the gym. It was certainly that alright, and, inevitably, large doses of steroids too.

As a peer and a rival of Arnold Schwarzenegger, another huge fan of performance-enhancing substances, in the early 1970s, Ferrigno used the drugs to get big enough to cash in on his fame then decried how bad they were for the human body, reneging on the terms of the traditional Faustian pact.

In a different place, a past history with steroids might be enough to disqualify somebody from serving on a government body charged with promoting fitness and health among the young.

America is, after all, a country where too many gyms struggle to contain the physiques of freakishly outsized young men seeking Popeye’s forearms by whatever chemical means necessary.

It could be argued Ferrigno at least knows that tawdry scene better than most. After all, in a classic cameo of ‘roid rage he once came upon a cop writing him a ticket, unleashed a Hulkian roar, and then shattered the windscreen of her motorbike with a single punch. As with the steroid abuse, he later apologised for that incident, and in recent years has become a reserve police officer in several precincts across America.

It’s not that he needed the work. Since his heyday as the splenetic version of Dr Banner, Ferrigno has featured regularly in bit-part roles on television and movies, while also carving out a niche as a personal trainer in California. In the latter role his most famous client was Michael Jackson, their professional relationship dating back to the early 1990s and lasting right up until a month before his death in 2009.

Financially, Ferrigno appears to have done well, although a few years back he sued his brother for trying to cash in on his fame by using the family name on an exercise equipment business. The lawsuit included a complaint that his sibling was seeking to exploit the Hulk brand by having a green awning outside the shop, a spurious and petty detail that a cynic might describe as positively Trumpian.

He might relish that adjective himself because his adulation of the current president survived the unseemly circumstances of his departure from Celebrity Apprentice. Having boarded the bandwagon early in the campaign, Ferrigno began publicly canvassing for a place on the president’s council almost as soon as the election was over.

Quick to talk up Trump’s, ahem, greatness, he was also smart enough not to mention that the man in the Oval Office believes physical exercise is essentially bad for people because humans are like batteries, born with a finite amount of energy that they must be careful not to deplete.

Maybe it’s time somebody also pointed out to him that Ferrigno won’t actually turn green and split his shirts across his back if the meetings go bad.