Just what is it that has America’s NBA stars dribbling by day and drinking fine wines by night? 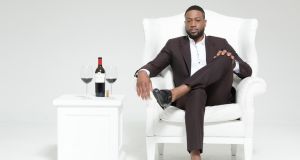 Dwayne Wade: “I think enjoying wine comes with age and sophistication and a certain kind of maturity.” Photograph: dwadecellars.com

Picture the scene. An inter-county player returns home from a big championship game and heads straight for the wine rack. He picks out a bottle of Cabernet Franc, uncorks and savours the fruity waft of raspberries. Pouring himself a large glass, he moves to the sofa. Then, he fires up the television to watch the match he played in earlier that day, sipping and taking the edge off nicely as he relives the action. Imagine then this character later speaking to reporters about his favourite post-playing routine, his beloved pre-bedtime ritual, offering that kind of detail about his twilight drink.

Of course, that’s a ridiculous scenario. On both counts. In an era when players are taught to monitor their pee colour every morning and alcohol consumption is as verboten as telling the media anything interesting, it’s impossible to envisage a hurler or a footballer publicly holding forth on the role of the grape in bringing him down from the highs of Croke Park. Yet, in the modern NBA, the wine culture is so pervasive that the scene described above is how LeBron James regularly unwinds after matches. That would be LeBron James, the 33-year-old supreme physical specimen who has played 1,350 games over the past 15 seasons and is in the conversation with Michael Jordan for best player ever.

Wade has produced his own eponymous brand in partnership with Pahlmeyer, a long-established winery in the region

“It kind of started around when I turned 30, actually,” said James of his passion for wine. “I started to just learn. I wanted to learn about it. Everybody was talking about how great it is and the different regions – not only here in America, but also obviously Italy and France and so many different places. So, I started to do some research. I started tasting different wines, and it took a while for my palate to actually give in to it. I’ve heard it’s good for the heart. As far as healing powers, I’m playing the best basketball of my life, and I’m drinking some wine pretty much every day. So, whatever it is, I’ll take it.”

It didn’t cause much of a stir in these parts, but that’s the type of incendiary quote that would get a lad drummed out of a county panel quicker than the time it takes to pronounce liebfraumilch. In the NBA, though, wine-drinking isn’t just accepted practice these days, it’s almost become de rigueur to show serious oenophile tendencies. Team-mates and peers marvel at James’s sommelier’s knowledge of wine the same way they stand in awe of his ability to produce preternatural performances on a nightly basis. He is not alone in this regard.

Three summers back, Dwyane Wade posted a holiday snap from the Bahamas on Instagram, showing himself, James, Carmelo Anthony and Chris Paul toasting their vacation with glasses of Pahlmeyer cabernet sauvignon from California’s Napa Valley. Affecting a debonair look, this quartet of rivals and sophisticates looked a long way removed from the sordid version of the NBA that was almost derailed in the 1970s by rampant cocaine use. Not to mention the beery decades that followed, rife with tales of Larry Bird drinking Charles Barkley under the table and Michael Jordan allegedly putting away a six-pack every night. It’s certainly difficult to envisage any of the icons from that era geeking out about their devotion to the educational wine app Vivino, apparently a staple on every modern point guard’s phone.

“I think enjoying wine comes with age and sophistication and a certain kind of maturity,” said Wade, whose mother battled alcoholism and drug addiction during his hardscrabble childhood on the southside of Chicago. “All of my friends that are 30 and up, a bottle of wine is what we go to when we sit down and have a conversation. When you’re younger, you’re totally different. Your conversations are different. Now, we sit down and drink wine and talk about investments.”

Befitting fabulously wealthy young men, these investments not only include cellars stocked with the best bottles money can buy, but also vineyards. Following a visit to Napa, the epicentre of American wine country, Wade has produced his own eponymous brand in partnership with Pahlmeyer, a long-established winery in the region. This is not just an endorsement deal with his name stuck on the label as an afterthought either. He has been centrally involved in the wine-making process over the past few years and has used his enduring celebrity from basketball to launch a cabernet sauvignon called “Wade” in China, the fastest-growing wine market in the world.

Yao Ming, one-time Chinese groundbreaker in the NBA, has his own vineyard just up the road from Wade’s in Napa. Former Los Angeles Laker Sasha Vujacic is producing Bordeaux-style reds at his place in Paso Robles, and San Antonio Spurs coach Gregg Popovich owns a large stake in an Oregon outfit famous for the quality of their pinot noirs.

The wine epidemic is so bad that last year one American sports website got experts in to analyse James’s taste, according to the bottles he shared with his Instagram followers. While he received mostly high marks for his choices, there was the usual innate snobbery about whether the most well-rounded athlete in history actually picks the wines himself, and some mild criticism, too, that he was drinking rather expensive vintages years before they would reach their peak. A rookie mistake, a faux pas he can well afford to make.