She’s proven she’s good enough but will a team be bold enough to give her the chance? 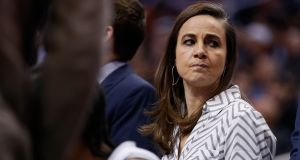 Ten years ago, Becky Hammon used to spend her winters playing point guard for CSKA Moscow in Russia. The quality of the league was top-class and the money was six times what she was picking up summering with the San Antonio Silverstars in the WNBA.

Things only got complicated when she was left out of the United States’ squad ahead of the 2008 Olympics in Beijing. The omission of one of the best ever US players seemed odd but then, as has always been her way, Hammon made the best of the setback.

An offer of a Russian passport came freighted with a substantial pay hike at club level and an opportunity to fulfil her Olympic dream, albeit wearing a red singlet with Ivan the Great’s crest of the two-headed eagle over her heart.

Not quite the sporting fantasy she nurtured as a child in the Black Hills of South Dakota, her decision to switch allegiance sparked an outcry. Her patriotism was questioned, there were “traitor” headlines and iron curtain-themed think pieces invoking Rocky v Ivan Drago. With her usual elan, Hammon rose above the din, learned enough Russian to sing their anthem (badly) and led her adopted country to bronze.

“This door opened and it was a great opportunity,” said Hammon. “My career has been about taking hold of opportunities and learning with them. I’ve had a lot of people pass on me. I wasn’t drafted. I wasn’t heavily recruited. I didn’t go to a big college. So I’m used to people telling me no. But there are always other ways.”

That last line might just be the mantra that defines her career and explains, at least in part, why Hammon will, some day very soon, become the first woman to be a head coach in the NBA. An accolade that has seemed pre-ordained for quite a while.

Five years ago, she asked Gregg Popovich for permission to sit in on his San Antonio Spurs training and video sessions. Within 12 months, she’d retired from playing and joined his staff as the first full-time female assistant in league history.

In 2015, she became the first woman to coach a team in the NBA’s summer league (where rookies traditionally get up to speed for the new season), helming the Spurs to the title in that competition. The type of promising career trajectory that normally culminates in a head coaching position except, of course, this one will involve breaking newer, harder ground.

Whether the 41-year-old gets to prove Gasol right depends on some pioneering club owner being bold enough to give her the chance. The Milwaukee Bucks reportedly brought her in to interview for their vacancy earlier this month, running their eye over an impressive resume that includes stints playing in Spain and Italy before beginning her apprenticeship under Popovich, the best coach of his generation. Of course, there remains a confederacy of troglodytes out there claiming any Hammon appointment will have much more to do with marketing than merit.

“The Bucks, though, aren’t a team desperate for something to hype,” wrote Gary D’Amato, a columnist with the Milwaukee Journal-Sentinel. “They’re a player or two away from becoming a serious contender, they’re moving into a new arena and they’ve got one of the biggest stars in the game in Giannis Antetokounmpo. What they need is an experienced coach with a strong personality to get them to the next level. I’m not saying Hammon can’t be that person. I’m saying it’s too big a risk to find out whether she is or isn’t.”

Every coaching appointment in every sport represents a massive gamble, and the chorus of those trumpeting her candidacy is loud and often led by LeBron James. Endorsements like his shatter the old canard that these men couldn’t possibly take instructions from a woman. It also makes the NBA, a league currently dealing with a sexual harassment scandal involving suits working for the Dallas Mavericks, sound like it has one of the more evolved playing populations. Even still, some contend James, Gasol, and all the other Hammon boosters, are merely giving politically correct answers for fear of attracting criticism.

On the flight back from representing Russia at the London Olympics, Hammon happened to be sitting next to Popovich, a former intelligence officer with a degree in Soviet studies. The pair passed the time discussing Moscow and a whole lot more than basketball. Towards the end of the conversation, he asked whether she’d be prepared to tell him uncomfortable truths if she was ever on his coaching staff. She assured him that would not be a problem.

A yes man, one thing she will never be.