Boxing high on Trump’s agenda after a phonecall from Rocky

America at Large: Trump has said he may offer a full pardon to convicted boxer Jack Johnson 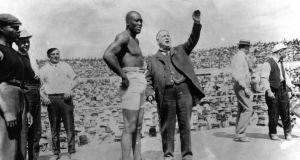 Jack Johnson on July 4th, 1910, before his successful title defense against ‘’The Great White Hope’’ James J. Jeffries in Reno, Nevada. Donald Trump has said that he may offer the former world champion a full pardon. Photo: Sporting News/Sporting News via Getty Images

On December 26th, 1908, Jack Johnson pulverized reigning world heavyweight champion Tommy Burns so severely that police climbed through the ropes in the 14th round to call a halt to proceedings. Later, it was alleged the New South Wales authorities wanted to stop the cameras which were filming the bout from garnering any more footage of a white man being so roundly thrashed.

Another version has it the cops merely wanted to end the one-sided contest to prevent a riot breaking out. Either explanation illustrates what it meant for the son of emancipated slaves from Texas to become the first black man to hold the title.

Two years later, Johnson suspected that his then girlfriend Etta Duryea was cheating on him with his French chauffeur Gaston le Fort. During a confrontation at the Pekin Theater in Chicago, he beat her so badly he had to carry her to a car so somebody else could rush her to nearby Washington Park Hospital. He implored a friend to go to Duryea’s bedside, begging her not to report him for the assault. She didn’t and, although the couple married soon after, she eventually shot herself in the head. Within weeks of her death, Johnson was dating Lucille Cameron, an 18-year-old prostitute from Milwaukee.

This is a tale of two Jacks. One is the uplifting story of a man who donned boxing gloves, honed his raw skills on the wharves of Galveston, and, during a subsequent seven-year reign as undefeated champion, did more than just about anybody to shatter the myth of white supremacy inside and outside the ring.

Truly a ground-breaker, he deployed his fistic talent to overcome centuries of ingrained prejudice and savoured the spoils of his victories by living large and lascivious, on his own terms, and was only brought down by a racially-motivated prosecution designed to knock the uppity black champion off his pedestal.

The other less wholesome narrative is a sordid yarn about a bully and a thug with a propensity to use the very same fists that humbled Burns, Jim Jefferies and a litany of other “Great White Hopes” to pummel the women in his life. History’s problem has been properly lauding a sporting achievement that tilted the world on its axis while acknowledging he was also a seriously flawed character. That age-old conundrum doesn’t seem to bother his newest, biggest fan.

“Sylvester Stallone called me with the story of heavyweight boxing champion Jack Johnson,” tweeted president Donald Trump the other week. “His trials and tribulations were great, his life complex and controversial. Others have looked at this over the years, most thought it would be done, but yes, I am considering a Full Pardon!”

Irony is on life support when the most bitter critic of contemporary African-American athletes exercising their right to protest is reconsidering the case of somebody once convicted of what the writer WEB Dubois dubbed “unforgivable blackness”. That was as good a description as any of an all-white jury in 1913 taking less than two hours to find Johnson guilty of violating the Mann Act, legislation brought in specifically to discourage inter-racial relationships. For transporting Belle Schreiber, another in his long line of white girlfriends, across state lines “for the purpose of debauchery and immoral purposes”, he was sentenced to a year and a day in federal prison. He then skipped the country, spending years in exile before returning to serve 10 months in Leavenworth.

There’s every chance Trump will issue this pardon because righting the wrong done to Johnson ticks key boxes when it comes to the ad-hoc way he governs. Originally brought to his desk by a celebrity (guaranteed to get his attention), it will allow him (laughably) to trumpet his historical awareness of racial issues, and, perhaps most importantly, to one-up his predecessor in the White House who wouldn’t touch this cause. On that score, nobody can overstate how much this presidency is driven by an almost demented desire to refute or repeal Obama’s every action or, in the case of Johnson, inaction.

While the latest bi-partisan push for a Johnson pardon began in earnest following the release of Ken Burns’ magnificent documentary about him in 2004, many presumed his time might finally come when Obama took office. It didn’t. The administration offered various, nuanced excuses for ignoring the boxer, contending their policy was to consider the cases of the living rather than the dead and arguing their energy was focused on releasing those serving punitive sentences for small-time drug offences. The real reason for their inertia may have been more prosaic.

“Jack Johnson, no question was convicted unfairly,” said Eric Holder, attorney-general under Obama, and the first African-American to hold that position. “That might be a historical injustice that might need to be rethought. There are on the other side, countervailing concerns about the way he treated women, physically treated women.”

Muhammad Ali prepared for his comeback bout in 1970 by watching old, grainy footage of Johnson and revisiting the story of a life epic enough in its dimensions to match his own. As he set about Jerry Quarry that night in Atlanta, an evening when the grandees of black America turned out to witness the return of their hero, Bundini Brown was even more vocal than usual in the corner, bellowing, “Jack Johnson’s here! Ghost in the house!”

1 Saracens to accept second 35-point deduction and effective relegation
2 Welcome to Iten in Kenya – home of champions and cheats
3 How do Klopp’s Liverpool measure up against greats of past?
4 James Ryan returns to the Leinster fold for Benetton clash
5 Jim Gavin to be conferred with Freedom of Dublin City on Saturday
Real news has value SUBSCRIBE