‘I feel I’m in the shape of my life. I feel physically fitter and stronger than ever’ 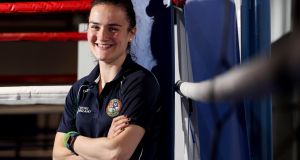 Kellie Harrington: “Light welterweight was 64kg. I was never actually 64kg. I was always lighter than 64kg but now I look bigger than I did when I was at 64.” Photograph: Tommy Dickson/Inpho

It seemed illusionary at the Senior Championships last February. Kellie Harrington, four kilos lighter than she used to be, seemed almost bigger than she ever did while beating Amy Broadhurst in the final. For a boxer that is a feat of presentation.

“Conditioning,” says Harrington. Simple as that.

For the current World Championship silver medal-winning light-welterweight (64 kg) fighter, her decision to move down to 60 kilos means the vacancy left by Katie Taylor’s move to the professional ranks after Rio 2016 is now filled.

Harrington’s decision was straightforward. To qualify for the Tokyo Olympics in 2020, she could drop four kilos down to lightweight or go up five kilos to the welterweight division. In hindsight there was no real choice at all.

To come in at 64 kilos, Harrington always had to reach up. So Taylor’s old residency at 60 kilos was more of a comfortable fall back fit than the Olympic category above at 69 kilos.

The European Championships, which begin on June 5th in Sofia, Bulgaria will be Harrington’s second major championships in the lightweight division after last year’s European Union Championships where she won the silver medal.

“It’s comfortable enough,” she says. “It’s just that I have put on a good bit of size as well with conditioning, so it’s down to my diet. I started cutting things out earlier rather than leaving it to the last minute so it’s not that I’m starving or anything. It’s cutting stuff out.

“Then cutting everything else down, not eating as much as I normally eat. That’s the hard part. It does feel like I’m hungry but still getting enough food in me. Because I’m used to eating so much.

“No it wouldn’t be that bad. No, no,” she says when Paddy Barnes is mentioned. Twice Olympic bronze medallist Barnes, at 49 kilos was regularly short-tempered because of the stress on his body making the weight. Regularly hungry and thirsty he couldn’t eat or drink when preparing for competition.

“Light welterweight was 64kg. I was never actually 64kg,” she adds. “I was always lighter than 64kg but now I look bigger than I did when I was at 64.”

Harrington first made her case at the top of the world field when she met Asian champion Wenlu Yang in the 2014 World Championship 64kg final in Astana, Kazakhstan. Narrowly beaten by the Chinese boxer, she became just the second woman after Taylor to contest a world final and the fifth Irish boxer to do so.

She also became the first Irish woman to finish ahead of Taylor in any world competition. Taylor left Astana with a bronze medal after losing her semi-final to Estelle Mossely. It was the only World Championship fight Taylor had lost since 2005.

But Kellie sees her boxing through the prism of Harrington, not Taylor. Although Taylor’s departure has left an amateur trail few will follow, it has also opened up the lightweight division for Tokyo. It leaves an opening for Irish boxers like Harrington to fill rather than a lingering shadow.

“Katie Taylor is a fantastic boxer. She’s accomplished so much and what she has done for herself is amazing,” says Harrington. “And credit for where she got to, what she’s done and where she’s going to go. She’s going to blow up even more now.

“But if 64 kilos was there [in the Olympics], I’d be doing 64 kilos. I wouldn’t be trying to do 60 kilos. There would be no doubt about that so I’m just taking each day as it comes, every tournament as a step, each round as a step.”

Harrington has reason to believe she can forge her own history. As recently as last year’s European Union Championships final, where she lost to Mira Potkonen, she again made a mark. It was the Finn who knocked Taylor out of the Olympics in Rio. Potkonen came away with a split decision victory after outlasting Harrington and forcing two standing counts in the final round. Right now Harrington is a year further along the track.

“I feel I’m in the shape of my life,” she says. “I feel physically fitter and stronger than I have ever felt before. I’ve been in with some of the best girls out there and brought back a silver medal from the European Union Championships last year at 60kg.

“So I’m there or thereabouts. Four years ago the goals were to get to the same level as the other top-class boxers. At the moment I’m at that level now.

“I was 64 kilos in the 2016 Euros. This would be the biggest test since the World Championships, yes. But I just look at this as another tournament, just another day. I’ll do what I can do.”

Now on a Sport Ireland grant, she has fallen into a full-time routine in Abbotstown with the elite boxers. But her job in St Vincent’s Hospital in Fairview, by her choice, has not been abandoned.

Aware she is being paid to box, she continues to work every second weekend. Dinners and the cups of tea with the patients, she says, is by choice not necessity. Or, as she further explains, is actually by necessity as well as by choice.

“Some interview I did before it came across like I was forced to work. I was furious over it. Nobody forces me to do anything. I do what I want to do and I love what I do. If I didn’t like it and I wasn’t happy I would never do it. I get great pleasure out of it. It’s a great fulfilment. All the patients in the hospital follow my boxing

“I bring in bars of chocolate and crisps and ice-cream. I’d have a party with them. I’d put on the music, be getting them up dancing. I love it and they love it. I’ve energy and they love it because they feed off my energy and they get a great buzz out of it. It’s a bit of stimulation. They are all my friends. They are very straight with you. They tell you how it is, you know.”

Harrington has a charm that is distinctly Dublin inner city and an ambition that comes straight from the elite team, one that knows it’s way around World Championships and Olympic Games better than any other sport in Ireland.

“We are not going to make up the numbers,” she says. “We want to be bringing back medals. Yeah, that is important. The World Championships and Tokyo would be the big picture.

“The world championships are in November so it’s the Euros, the Worlds and the European Games, then qualifiers for Tokyo. The next year and a half is big. It’s challenging.”

And that’s the reality. No illusion.