Queen Serena forcing sport to catch up with modern life 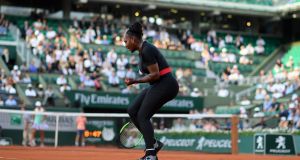 Serena Williams during her win over Australia’s Ashleigh Barty in the second round of the French Open. Photograph: Getty Images

Waiting for sport to catch up with modern life can be like watching paint dry. You know it’s going to happen eventually but the rate of progress is painful.

How the Women’s Tennis Association is only now coming under pressure to review its policy around seeding and maternity leave is mind-boggling. From Margaret Court and Evonne Goolagong-Cawley, to Kim Clijsters and Victoria Azarenka, women have been having babies and returning to high-profile tennis careers for decades.

Would we even be having this conversation if it wasn’t for Queen Serena? Consistently asking the big questions on race, women, sexism, maternity, pay equality and profile the No 1 (well, technically No 451 under the WTA’s archaic policy) continues to represent for women the only sportswoman powerful and popular enough to penetrate the top end of sports rankings’ lists such as this week’s ESPN World Fame 100.

How is it even possible that a player could keep their seeding through injury but lose it while on maternity leave? I have yet to read the definitive distinction between coming back from a baby and rehabbing from injury. There’s your abdominals to realign, your pelvic floor to recover, caesarean scars to heal – never mind the fitness requirements.

It’s rare to be able to look to football for good news stories on equality, but from the awe-inspiring sight of the Chelsea manager, Emma Hayes, overseeing her team’s league and FA Cup double at eight months pregnant to the impressive return of Football League official Lisa Rashid, who passed her fitness test only 17 weeks after giving birth to a daughter, Isla, combining motherhood with a career in football is definitely getting easier. That’s not only down to extraordinary individuals such as Hayes and Rashid but also to changing regulations that support women in their return.

The FA’s Pregnancy and Refereeing Policy helped pave the way for a change in policy around the all-important fitness test – previously a set date regardless of how recently a woman had given birth – which, if failed, meant missing the entire next season of officiating. The FA now offers a choice of dates, to women and men, enabling greater flexibility over meeting the fitness targets.

This year, for the first time, Fifa allowed a female referee to bring her partner and baby to one of their tournaments so that she could continue breastfeeding as well as officiating. One senior official told me she had seen women – reluctantly – leave their babies at six weeks in order to keep up with the demands of the job, a move that is both physically and emotionally tough. For match officials, players, coaches and journalists tournaments mean being away from home for five weeks or more. With a baby that can be an extremely difficult act to juggle, particularly if you’re breastfeeding.

For female players, however, motherhood is yet to be embraced by the sport, with Hayes criticising the support available in English football. Only one per cent of players in the Women’s Super League are mothers, according to Fifpro data, and only three per cent of top-division clubs worldwide provide a creche facility. Perhaps the FA could take a look at provision for national team players in the US where they are allowed to bring their children to tournaments and training camps, and are given financial support to cover associated childcare costs.

If motherhood is a career killer, it is no surprise that women remain so underrepresented in sport – an average 1.8 per cent of all sports newspaper content is written by women and only two per cent is about women’s sport.

Women make up only 7 per cent of professional football boardrooms while football’s gender pay gap is worse than in politics and medicine, dominating the worst offenders list in the recent compulsory data publication with women paid a quarter of their counterparts at football clubs, or 16 per cent less if you take Premier League players’ wages out of the equation.

What remains a surprise to me is that sport – a sector in which innovation, talent development and marginal gains are all prized buzzwords – could be so slow to embrace the benefits of equality. Without talent ID days we would never have had the phenomenon that is Helen Glover, the two-times Olympicchampion and three-times world champion rower. At 5ft 8ins, and having never previously rowed, she would never have navigated her way to the top of the sport without an intervention.

It is only when organisations are committed to change, to taking a leap of faith, to investing in identifying and developing talent, that women can truly become equal in sport. It’s one of the reasons that I am so excited about Women in Football’s WhatIf campaign which asks individuals and employers to make a pledge for change to support women and girls in the sport. The campaign, created by sports marketeers Synergy (who offered their services pro bono in an effort to play their part in improving equality in sport), quickly went viral, with pledges flooding in.

BBC 5Live’s 606 World Cup edition with Kelly Cates and Ian Wright offered work experience to women wanting to get a foot in the door, Sky Sports pledged to include female pundits on their midweek games next season, Judy Murray offered a coaching masterclass, Wimbledon promised to make their digital output gender-equal at this year’s tournament and Spencer Stuart is ensuring 30 per cent of candidates for job searches in football are women. Fifa, among others, has promised its own pledge is soon to follow.

We have been waiting for years to see anything like this level of commitment to change, but now it’s happening it’s clear to see that it’s really not that hard, or painful, to change sport for the better.