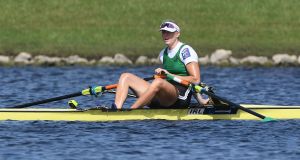 Sport is unpredictable. Single sculler Sanita Puspure and the lightweight double of Paul and Gary O’Donovan lined up for A Finals at the World Cup Regatta in Belgrade on Sunday. The O’Donovans are Olympic medallists; Puspure has not been on a podium since before Rio, where she slipped into the C Final. Puspure raced to silver, the O’Donovans took bronze.

The silver looked like a breakthrough for Puspure, whose previous bests had been bronze medals at the European Championships in 2014 and 2016 and at the World Cup in 2016 in Varese.

“Oh yeah,” she told the Irish Times. “It’s a different colour this time! It feels good to be racing well early in the season.”

Belgrade is her favourite course, and she was taking her third medal there (stretching all the way back to 2003 when she competed for Latvia at under-23 level). But she was not counting any chickens before the race. Virtually all the top contenders fought it out in a fine contest. In the second half, world champion Jeanine Gmelin of Switzerland took over from Austria’s Magdalena Lobnig, the world bronze medallist.

Those two looked secure, but Puspure, who had already put world silver medallist Vicky Thornley of Britain behind her, engaged her finishing speed and passed Lobnig. That sprint has sometimes come too late, but not this time. “I’m getting braver,” Puspure said. “I always had it in the second 250 of the last quarter, now it’s coming in the first 250, or even earlier.”

Gary O’Donovan and Paul O’Donovan took another medal on their impressive odyssey. This time they had to give way to Poland’s Jerzy Kowalski and Milos Jankowski. Ireland started well, but Poland covered it and led through 1,000m and 1,500m. When the Skibbereen men engaged the afterburners, Poland covered that, too. They won by over a second. Belgium came through to pip Ireland for the silver by 0.1 seconds.

“It was a tough race,” said Dominic Casey, the Ireland lightweight coach. He acknowledged that the tactic of holding until the second half of the race and sprinting is now no surprise. “They’re all watching us now!” he said.

Three Irish women’s crews raced in B Finals. The women’s pair of Emily Hegarty and Aifric Keogh, and the double of Monika Dukarska and Aileen Crowley, both finished third - ninth overall. The lightweight double of Denise Walsh and Margaret Cremen were sixth, 12thin the full rankings.

On Saturday the men’s pair of Mark O’Donovan and Shane O’Driscoll raced well but took third in the C Final. This ranked the reigning world lightweight champions 15thof the 22 crews competing.