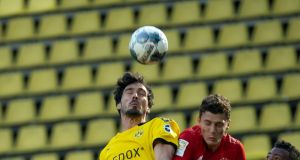 The financial cost of the current crisis to all of sport is, it’s widely accepted, going to be sizeable but this morning Gavin Cummiskey reports that Munster Rugby could suffer particularly badly as they will be unable to pay off their Thomond Park loan with no supporters at matches. The province followed Leinster yesterday in suspending renewals of season tickets for the 2020/21 campaign and it is the outstanding €6.9 million loan owed to the IRFU that could be a problem. Meanwhile, Gerry Thornley writes this morning that many rugby players are using this enforced time off to look to the future and think about what they might do after they finish playing. “The more a player invests in his future during his career then the more beneficial it will be, both in the shorter-term and the longer term,” he writes.

Moving on and there was live football from Germany last night as Joshua Kimmich’s inspired chip saw Bayern Munich squeeze past Borussia Dortmund in what was one of the best matches played behind closed doors since the Bundesliga restarted. In her TV View column Mary Hannigan is not so enamoured with James Richardston’s studio clichés or, indeed, the Zoom calls into the station from fans but seeing Bayern Munich win a big match was a nice familiar feeling of normality. Meanwhile, the Saudi Arabia-backed takeover of Newcastle United looks to be in serious doubt after the World Trade Organisation (WTO) ruled that the country is behind a pirate satellite TV and streaming service that offers illegal access to sporting events. The doubt now is whether the takeover bid will pass the Premier League’s owners’ and directors’ test.

1 Keith Duggan: Bubba Wallace tweet shows just how troubled Donald Trump’s mind is
2 50 best Irish albums of all time – in order
3 Coronavirus: Two more deaths confirmed amid concern over new clusters
4 Cluster of Covid-19 infections at Kerry ‘house party’ investigated
5 Thandie Newton names names. Will Hollywood punish her?
6 Brightest comet of the century visible in Irish skies for the next week
7 Jack Charlton’s own grievances endeared him to Irish fans
8 ‘At night I would go to my room to quietly drink.’ Irish women and addiction
9 Belgium helps Ireland to a Brexit boon
10 David McWilliams: The Pandession is destroying Ireland’s Craic Economy
11 Fintan O’Toole: In the US, the 19th century is coming to a very slow end
12 ‘My rent here is so low it’s a joke’
13 Dave Hannigan: Notre Dame’s Fighting Irish leprechaun needs its ass kicked
14 Johnny Depp: Ex-wife or friend defecated in bed in ‘fitting end’ to marriage, court hears
15 Jack Charlton obituary: One of Ireland’s greatest adopted sons
16 The Gael Becomes Irish: the prospects for the Irish language in Ireland today
17 Reopening of pubs that do not serve food may be delayed beyond July 20th
18 Bobby Storey: The IRA's planner and enforcer who stayed in the shadows
19 Can Grafton Street stop the flood of closures?
20 Paschal Donohoe’s victory seen as a revolt against EU’s ‘big four’
21 This jewel of a gravel garden needs weeding just once a year
22 Jack Charlton: Tributes paid to ‘sporting icon’ and ‘father figure’
23 FF, FG should know Greens willing to walk away from government – Catherine Martin
24 Non-wearers of masks on public transport face fine and jail sentence
25 Patrick Freyne: A very likable baby with a beard – it’s Zac Efron! – explores the world
26 John Bolton on Trump’s presidency: ‘Every day is a new adventure’
27 Covid-19: Cases rise in US, India as Australian spike leads to localised lockdown
28 Many politicians remaining silent over online personal abuse
29 Former Republic of Ireland manager Jack Charlton dies aged 85
30 Jack Charlton’s tactics were divisive but he transformed Irish expectations
31 Michael Collins’ grandniece welcomes decision to leave portrait in Taoiseach’s office
32 Two injured after plane crash lands in Galway
33 Sweden’s grim Covid-19 result: More death and nearly equal economic damage
34 It’s time to end the Airbnb effect on Dublin’s housing supply
35 Miriam Lord: Paschal’s win makes Phibsboro the financial capital of Europe
36 Paul McGrath pays tribute to ‘father figure’ Jack Charlton
37 Why do Orangemen march? The Twelfth of July explained
38 ‘The Art of War’: As relevant now as when it was written
39 South Dublin house vacated after 10-year-old row over bequest
40 Two men charged in relation to Cork’s largest ever heroin seizure
Real news has value SUBSCRIBE