When the action stops, sports photographers think outside the box

From supermoons to graveyards and castles, the Inpho staff have thought on their feet 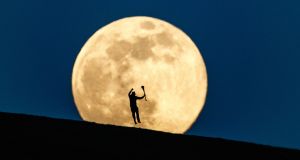 In the immediate, live action world of a sports photographer, being there is the thing. Bearing witness. Sending back the shot of the spot where the thing happened that everyone wanted to see. But what happens when there’s no there to be? When there’s nothing to witness, no happening to shoot? What then?

For the snappers at the Inpho sports photography agency, the turning off of the sports tap was an unimaginable turn of events. You can plan for just about everything and make contingencies for all sorts of hellish scenarios. But nobody in their maddest notions ever conceived of sport simply not existing for a while.

“The pipe just stopped,” says Morgan Treacy. “I had jobs lined up after that Friday that everything went into locked down and they literally just stopped that day. And sport stopped. It took a while to adjust to it, even in my head. I’ve been with Inpho 20 years and I’ve never had a quiet week. It definitely took a couple of weeks to get my head around it. I was floundering really, not knowing what to do.”

Everywhere you look in sports media, the problem has been the same but the solutions have had to differ depending on circumstance. A bit of nostalgia here and there is fine for newspapers and will fill out hours of TV schedules. But sports photography is about the here and now. You turn up, you click, you file, you move on. Next day, next game, next sport.

“I was at Clonmel races on the day lockdown was announced,” says Bryan Keane. “We were there covering the last race as the announcement was being made – I was sitting in the stand with my laptop uploading photos. One of the TV guys went, ‘That’s it now, nothing to do for a couple of months.’ And you know he’s right but you’re going, ‘Really? What do we do?’ It’s just such a bizarre landscape.”

Imagination was the only club in the bag they could use. They started ringing around sportspeople and asking them how they were getting through it all and could they come and take some socially distant photos. In the early days, most – the majority, in fact – said no. It was hard to blame them, given the fear of the times.

“I would say that in those first weeks, 90 per cent of people we rang said no,” says Treacy. “Understandably – nobody knew what they could do and what they couldn’t. Everybody was afraid. There was paranoia and fear about even meeting anyone.”

As the weeks have passed and everyone has become more comfortable with life in general, the scene has loosened out. Last Monday, the people got back to doing their thing in small doses – playing golf and tennis, sailing, rowing, swimming in the sea. The return of some sort of sport meant the snappers were out and about again. Keane got into the sea down at the Forty Foot and his underwater picture of two swimmers giving him the thumbs-up made the front of The Irish Times the next day.

“Those are gigs I just wouldn’t have been doing before,” Keane says. “It was cool, I was able to get into the water and just try something. You’re just trying to keep yourself relevant. Being able to leave the house and actually be on a job rather than going looking for a job was a really nice feeling. There was a sense of normality there.”

Big time sport isn’t back yet but there’s a growing sense that we’re over the worst of it. Inpho will be at the first Irish race meeting in a few weeks. They’ll be wherever teams are starting to train in small groups on June 8th. The world is different now but the job is the same. Just with one or two new things to keep in mind.

“I went to do a picture with a local GAA club in Offaly,” says James Crombie. “Down on the bog where they were footing turf. And even something like that, you’re going, ‘Oh God, I hope they’re social distancing properly. I don’t want to get them in trouble or anything.’ They were but you want to be sure. Because not everyone is – one place I went to take a photo, they said, ‘Ah sure come on in, you’ll stay for dinner!’”

True to tradition, Crombie made his excuses and left.

Photo: The man on the moon

It was actually my twin brother David in the photo. I had been thinking about the possibility of doing a picture like that for 10 years. I needed to be roughly a kilometre away with a 600mm lens. If you can get somebody at that distance with a clear sky and if you can predict where the sun will come up, hey presto.

It’s Croghan Hill, which is actually an old volcano. I had been telling a friend of mine about it and lucky enough he’s geophysicist and he basically said it’s Leaving Cert maths. He calculated to within three or four feet the best spot to stand a kilometre away.

I gave my brother a hurl and sliotar but also a football so I could do both. Unfortunately, he let the football roll down the hill just before we started shooting. And the thing was, there was only going to be about a 90-second window before the moon disappeared below the horizon. So we had to leave the football where it was.

I ran into somebody locally here and they were going, ‘We were on the hill that night looking at the moon. We saw this fella running and jumping and waving his hurley and we couldn’t work out what he was at at all. Now it makes sense.’

Andrew Coscoran, was training in Balbriggan. He was doing a 2km loop along the train track there, down by the beach at the harbour. This was at a time when you could only go two kilometres from your house. So basically this was a guy who was running 100 miles a week and he had a two-kilometre loop near his house to do it in. Thankfully for me, it was a really scenic 2km loop.

It made for some nice images because there was a great contrast between him and the bridge that the train runs along. He was dwarfed by these arches and the light was lovely at that time of the evening. He was a really nice guy and I was actually really grateful at the time that he did it. This was quite early on and I’d had so many knockbacks and was casting around a bit.

Brian Moore is an MMA fighter in Wexford. I had never met him before, a very interesting guy. I went down to see him and he was telling me how he is going about his fighting, his mental changes, his goals.

I shot him in a lovely graveyard. He goes there to do some shadow boxing sometimes and to get himself a bit of solitude. There’s a beautiful view over the coast there at Carrig-on-Bannow and it’s good for the head. I was able to shoot him through an archway in the graveyard, which was a kind of a unique view.

I was able to go down to Dún Laoghaire to take photos of Annalise Murphy on the last day before the full lockdown restrictions kicked in. It was right towards the last week of March. The sailors were allowed out on the water but they weren’t allowed to be coached or have their coach out on the water with them.

That was nice to get to do that. I was able to get in the water and get her as she came back into the harbour. It was a very nice shot – you can see the harbour wall in the background as she’s coming in. It was cool to get it before everything shut down completely for a while.