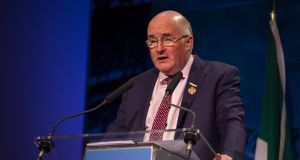 John Horan: central logic of his position was that games couldn’t resume if social distancing remains a requirement. But recently attitudes have begun to change and the president has started to morph into an Old Testament prophet. Photograph: Tom O’Hanlon/Inpo

Nothing happens but circumstances change quickly.

It feels a lot longer than just over a fortnight ago that GAA president John Horan received general kudos for his firm statement of where the association stood and where it hoped to be in the weeks ahead during the current coronavirus pandemic.

The central logic of his position was that games couldn’t resume if social distancing remains a requirement. There were few dissenters, given the community base of GAA clubs and their reach into surrounding communities.

In the interim attitudes have begun to change and the president has started to morph into an Old Testament prophet.

The Club Players Association released a survey indicating that more than 40 per cent of those polled – a healthy sample size – weren’t happy to play or in some cases attend inter-county matches pending a vaccine.

This hankering for a vaccine has become an item of amusement in that such a solution is as likely to occur in the near future as it is to have its formula announced in this column.

But this dismissiveness hides an important truth: a significant number of players and those involved simply want to be safe and aren’t prepared to return to action until the danger has passed to a significant extent whether by discovery of a preventative vaccine or else an effective therapy.

It may well be that if community transmission dries up and testing capacity gets down to 48 hours or so, matches will be deemed safe enough to go ahead provided there exists capacity to stamp out any further outbreaks before they spread. But that’s a fair level of conditionality.

Demands to open club facilities in advance of July 20th, the stated target date of Phase 4 of the Government’s restriction easing, have intensified and Horan’s undertaking to examine the possibility of organising volunteers to supervise the opening of club walkways for older people looks to be on the way in Phase 2, June 8th.

Privately GAA officials regard a lot of the agitation as media-driven – for understandable reasons – but the fact is that the views of well-known inter-county figures are not invented.

It is a further conundrum that one of the association’s proudest boasts, the extent to which many rural clubs provide the only recreational facilities in their areas, contrasts with the situation in cities where public parks are available for those wanting to kick and puck around – as pointed out this week by TJ Reid.

The public health numbers have improved with deaths reducing and the numbers of new cases settling daily at less than a hundred for most of the last fortnight.

This trajectory has been acknowledged by the health authorities as being in the right direction and the mood within the GAA has grown strident in some quarters and in others links are being seamlessly made between easing restrictions and the return of championship matches at some point by the end of the year – on the basis that risks are going to have to be taken at some stage.

The problems with these gung-ho projections are obvious. Numbers might be sympathetic at the moment but it’s only nine days since Phase 1 began and the impact of that on daily cases won’t be seen until later this week at the earliest.

Yet the caution of John Horan’s approach that by and large impressed on 10th May is now coming under pressure.

Opening pitches before the scheduled date of Phase 4, July 20th – basically eight weeks away – is the most obvious but like the old, unlamented Rule 42, the current position provides security for clubs. Its overarching provision means that they can’t be leaned on.

Does it make sense? For the moment, probably. Unless access to pitches is to be supervised, which could maybe happen at designated times, there’s no way of monitoring how many will end up kicking or pucking around. It’s not surprising that club officials would rather be spared that responsibility.

It’s also the case that other sports at the more recreational level of involvement – club rugby and for example in soccer the Dublin and District Schoolboys League – aren’t flying back into action either with the DDSL stating on its website that it’s not authorising a return to training until Phase 4, July 20th.

The GAA view on the unwinding Government relaxation is that if everyone can get to Phase 2 on Monday week with the impact of Phase 1 not having knocked everything off course, then Phase 3 is almost a given. Croke Park sources have already indicated that if the numbers keep improving, the association’s schedule will reflect that by moving forward more quickly.

But focus on other sports has tended to be at the elite end of the spectrum: various European soccer leagues getting ready for action, Irish provincial rugby targeting matches in August and League of Ireland clubs also preparing to dip toes in the water.

Securing broadcast revenue is an obvious prompt in these cases but the GAA has been insistent from the start that club activity will have to resume first before inter-county competition gets up and running.

This remains the strong view despite plausible arguments being advanced to the effect that county teams are easier to monitor and to organise.

The practical opposition to that is that it makes more sense to bring back the clubs first, as that’s where most people play and Croke Park doesn’t want to run into a storm of protest at some notional announcement that they’ll be prioritising the elite inter-county game with the other 98 per cent looking on.

Put simply, there’s a long way to go. At this stage the GAA might make that clear to its more excitable devotees.