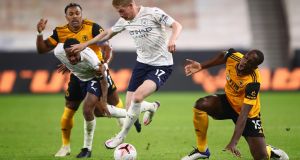 Manchester City started their Premier League season off with a 3-1 win over Wolves at Molineux last night. Pep Guardiola’s side led 2-0 at the interval but found themselves hanging on to a one goal advantage for the final 15 minutes after a sustained period of pressure led to Raul Jimenez’ bullet header rattling the City net. Gabriel Jesus’ deflected injury time effort though made sure of the three points and avoided any repeat of Wolves’ comeback victory at the same venue last season. Earlier Ezri Konsa secured a winning start to the season for Aston Villa against Sheffield United, who missed a first half penalty and lost Ireland centre back John Egan to a red card after 12 minutes. In last night’s Airtricity League premier division clash at Tallaght Stadium, league leaders Shamrock Rovers put six goals past Waterford to move eight points clear at the top of the table.

After his historic Tour de France final stage victory down the Champs-Élysées on Sunday securing the best sprinter’s green jersey, Ian O’Riordan asks what’s next for Sam Bennett after the toughest of Tours? The Irish rider is likely to miss the Giro and Vuelta, his next focus will be races in Belgium, home to his Deceuninck-Quick-Step team, and among those being considered is the Flèche Wallonne (September 30th), Liège-Bastogne-Liège (October 4th), Ghent-Wevelgem (October 11th) and the Tour of Flanders (October 18th). He will also be unable to defend his National Road due to travel restrictions around Covid-19. Two people were in custody on Monday after an investigation was opened into suspected doping by the Arkéa-Samsic team at this year’s Tour de France.