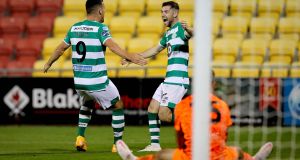 Waterford had looked to pose something of a threat before this game after having just scored a combined five without reply against St Patrick’s Athletic and Bohemians. Not that Stephen Bradley’s side have liked the game to be characterised as any sort of revenge mission but the capital’s dented pride was still more than restored with the goal deficit safely cancelled out in one fell swoop.

It was a very solid night’s work from the would be champions with Shamrock Rovers comfortably clearing another hurdle in this title race and edging their way towards a home straight that will open up wide before them if they secure any sort of result at Oriel Park next Sunday.

The visitors had spells in each half here when you could see exactly how they had managed such impressive wins. They showed enough of their other side too, however, for the high scoring home defeat by Finn Harps not to be much of a mystery.

Both sides could have had more out of what was a very open game and Graham Burke will be grateful his early shot wide of an open goal did not impact on the result at all. In the end, he and the rest of the home side’s regular front line - Jack Byrne and Aaron Greene - all chipped in with goals, Dean Williams got his first for the club’s first team and Waterford’s second strong spell came only after Bradley had taken the opportunity to replace almost half his starting line-up around the hour mark

Waterford battled bravely enough through the opening stages but went behind just after what had been their best stretch of the opening half. Not that Alan Mannus had actually been troubled but the visitors did seem to grow in confidence to the extent that Bradley might have concerned his side were going to be punished for some early profligacy.

The visitors, though, always seemed to have a potential problem in Neil Farrugia whose tendency to push forward and hug the line left Kurtis Byrne having to track back further than he would have wanted.

Sure enough, after a couple of close calls that was the flank from which the Rovers breakthrough came four minutes before the break although not quite in the way that might have been expected.

In fact, the goal bore a striking resemblance to the one conceded by the home side against Milan last Thursday with even the various players’ locations almost identical. Right back Oluwatunmise Sobowale played the part of Joey O’Brien in the recreation, confidently kicking off an attempt by his side to play their way out of defence.

Under continued pressure, though, Waterford played the ball back to Jake Davidson who was just a few yards from the corner flag when he, just as Roberto Lopes had, made a hopelessly poor attempt to clear the ball and succeeded only in passing it to an opponent. Farrugia happily accepted the gift and set up Aaron Greene to apply something resembling the Zlatan Ibrahimovic finish... which he did, within reason.

Had Fran Rockett’s side got in safely at the break with just that goal in it, perhaps they would have steadied themselves but they didn’t come even close. Instead, Rovers produced two goals in as many minutes that were carbon copies of each other with Jack Byrne sending in the corners for first Lopes then Lee Grace to head home.

Poor defending contributed to Byrne’s, Burke’s and, late on, to Williams’s goal too but all were well worked and finished. Michael O’Connor put Tyreke Wilson’s low cross away rather nicely too but the goal didn’t come close to derailing the Dubliners here and if that doesn’t happen in Dundalk, it is increasingly hard to see where it could happen at all at this stage.