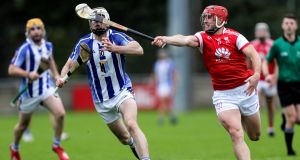 And so the 2020 Dublin hurling championship ended with a Kerryman giving a speech entirely as Gaeilge to an empty stadium as his teammates spread out two metres apart down in front of him. Just exactly as everyone had predicted it would when the draw was made back in February.

There was at least an element of the day that turned out as billed: the Kerryman was Cuala captain Darragh O’Connell and, for the fourth time in five seasons, the Dalkey club are champions. They came through at the end of quite the titanic battle too, eventually breaking Ballyboden’s stout resistance with a string of late scores. From the second-half water break on, they outscored Boden by 1-5 to 0-2. Championship minutes from a championship team.

Up to that point, there had been very little to separate the sides. For a game with no spectators, the place fairly rocked and rolled throughout. The subs bench on either side recast itself as their team’s cheering section and there was no shortage of ammunition. Three goals, two red cards, some unbelievable score-taking – Parnell Park somehow didn’t lack for atmosphere despite everything.

“Very tough to take,” said Ballyboden manager Joe Fortune afterwards. “I thought we did very well in the first half, I thought we were motoring well. And then a couple of tough decisions I thought rocked it. We had three or four wides in a row at one stage when we were five up and we just couldn’t push on. It’s not for the lack of effort. These games are won on fine margins – that’s an immense Cuala team.

“Maybe we gave away a couple of frees at a critical time and we had a couple of chances at the end when the ball was cleared off the line. Look, it’s been a strange year, a tough year for a lot of people. This hurts but there’s a lot more significant things in everybody’s life at the minute. We’ll hurt today and we’ll move on in the next couple of weeks and hope that everybody’s safe and sound at the end of it.”

If and when they sit down to watch this back, Ballyboden will rue letting it go so easily. They hadn’t just done the hard bit in the first half, they had done multiple hard bits. They had frozen Con O’Callaghan and Mark Schutte out of the game, they had taken plenty of their chances, and they had left Cuala looking ordinary when they are anything but.

Boden minced the Cuala puck-out for long stretches of that first half, so much so that one score would occasionally count double. Aidan Mellett and Paul Ryan both found themselves able to whip points straight from the puck-out less than 30 seconds after a Ballyboden white flag. It was demoralising for Cuala, who couldn’t get grip of the game in around the middle.

All that kept Cuala in it for much of the half was David Treacy’s accuracy in front of the posts and a glorious whipped goal by Seán Moran. Though more commonly used as a centre-back/sweeper for Dublin, Moran was playing in the forwards here, and his end-of-day total of 2-3 tells you why. His opening goal was a stunning strike, pinged into Finn McGarry’s top-corner after a rare Cuala turnover.

It was badly needed because otherwise Ballyboden might have been out of sight by the break. Their goal came from Conal Keaney, following in on a saved Paul Ryan penalty so far ahead of the chasing pack he had time to set himself up for the finish with a flicked first touch. It came five minutes short of the break and put Boden 1-11 to 1-5 ahead.

But Cuala didn’t find their way to the top of the tree by getting an attack of the vapours at a six-point deficit. Schutte pulled off a vital flick to set up O’Callaghan for his first point of the day in first-half injury-time, and followed up with a point of his own with the last puck of the half. It was huge leadership exactly when they had to have it.

It gave them something to aim for in the second half and they duly reeled Ballyboden in. Treacy was unimpeachable all day, never missing a ball. Indeed, Cuala’s shooting stats as a whole were off the charts – they scored 2-20 from 24 shots at goal.

When they put on the afterburners in the final quarter, Boden had no answer. Moran buried his second goal of the day on 61 minutes, this time from a penalty. And though Mellett replied with a fine score to put just one between them heading down the stretch, Moran, Treacy and Nicky Kenny sealed it for Cuala.

“This group of players, once you’re in a battle and once you’re in a tight game, you have a chance,” said Cuala manager Willie Maher afterwards. “They ultimately showed that in the end. We started working the ball much better . . . with the wind our clearances were going a bit further into the full-forward line. And we were able to do damage. That ultimately was the difference.”