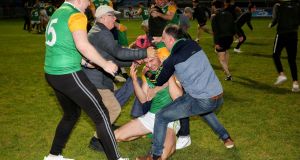 Some supporters ran onto the pitch at Healy Park after Dungannon Thomas Clarkes won their first Tyrone championship in 64 years on Sunday. Photograph: Lorcan Doherty/Inpho

Ulster GAA is anxiously awaiting the fallout of Sunday’s breach of Covid-19 safety regulations at the Tyrone football final in Omagh. The scenes from Healy Park showed supporters with no social distancing or other precautions, swarming onto the pitch after Dungannon Thomas Clarkes victory over Trillick and the club’s first senior title since 1956.

Privately, officials were concerned about the broader impact of the incident, which an official statement accepted “not only breached GAA protocols but, and much more significantly, public health guidelines”.

On Monday evening, the PSNI issued a statement in Northern Ireland that it intended to investigate any potential breach of health protection regulations.

Northern Ireland First Minister Arlene Foster referred to the scenes in Omagh among others examples of bad behaviour when unveiling new restrictions to combat Covid-19.

“Whether they ran onto the pitch at a GAA match, partied in bars afterwards, swarmed the streets of Belfast Holyland or indeed crowded into house parties that kind of behaviour isn’t just a risk to those present, but of course for everyone they subsequently come into contact with.”

Earlier in the day Ms Foster had issued a tweet expressing “concern” about what had happened after the Tyrone final.

Ulster GAA was quick to respond with a statement, “strongly reiterating the GAA’s message that no spectators should enter the field of playing following games”.

It defended the association’s overall record in staging matches, pointing out that what happened in Omagh had been the exception rather than the rule. It also took into account the context of Dungannon’s success for the first time in 64 years and after extra-time and penalties.

“The GAA has put in place protocols surrounding all aspects of the playing of games and, for the greater part, they have been universally observed. Over the weekend there were adult county finals in six of our nine counties and evidence from across the province is that these protocols were adhered to, with spectators remaining in the stand during postmatch presentations.

“However, the on-pitch celebration scenes following the Tyrone county final in Omagh not only breached GAA protocols but, and much more significantly, public health guidelines.

“Ulster GAA fully realises that this was a moment of great joy for the Dungannon Clarkes Club in winning their first county title since 1956 and congratulations to them on this success. The dramatic nature of the conclusion of the game probably added to the exuberance but we are living in a pandemic and the postmatch scenes did not portray the association in a positive light.”

Sounding a warning note, the statement concluded by saying that such misbehaviour could end up with all fixtures behind closed doors.

“The GAA has acted in a positive manner since the outbreak of the pandemic, with attendances at games strictly regulated. Our supporters have responded positively and responsibly but last night’s scenes undoubtedly placed GAA members and their local community at greater risk to Covid-19.

“It also potentially undermines the GAA case, and indeed the case for wider sport, to be permitted to have increased numbers attend our games.

“With more county finals due in the coming weeks, Ulster GAA is again appealing to all our units to behave responsibly. The scenes of last night cannot be repeated or we will risk going back to a position where all games will be played behind closed doors.”

Elsewhere in Ulster, Donegal have announced that the senior county final between Kilcar and Naomh Conaill will go ahead in Ballybofey next Sunday despite a Kilcar player having tested positive. The situation could change pending tests on other players.

The county had already announced on Saturday that intercounty footballers were being tested after one of the panel had tested positive for coronavirus. A number of tests have come back negative but there was no official word on Monday that everyone was clear to continue.

According to county PRO John McEniff, the protocol is that a team can play in the event of one player being stood down but not if any more also test positive.

Donegal has been mentioned by Government as among a few counties where the rising number of infections is a concern and on Monday, the county had 21 further confirmed cases.

In Dublin, meanwhile, the county board has stood over its interpretation of “senior” fixtures applying to all adult matches. With the county in Level Three of the pandemic restrictions, all events are off. The exemption for elite sport includes professional sports as well as intercounty competition and “senior” club championship matches.

A request to clarify the club categorisation was submitted and according to a GAA source: “We’ve received clarification on that and it refers to adult.”

A Dublin spokesperson said: “We got clarification from the Department of Sport. The GAA established that the mention of ‘senior’ included all adult grades. Authorities weren’t that interested in the standard of particular players so senior, intermediate and junior were eligible to play championship.”

1 Seán O’Brien: Anger over my parents’ break-up never left me
2 Plenty of positives for Farrell as Ireland hit the ground running
3 All in the Game: Klopp’s Amsterdam subs don’t go down well
4 Madness or defiance? The GAA is taking a huge gamble in staging Championships
5 Will Connors chops his way to the front of Ireland’s openside queue
Real news has value SUBSCRIBE