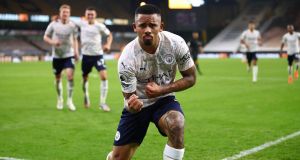 On a gripping night, Manchester City produced a performance of two distinct and telling halves: an imperious passing-machine in the first, City were run thrillingly close in the second by a Wolves team that attacked its weak point on the left flank to great effect. It took some poor Wolves finishing for City to see out a 3-1 win in their first game of the Premier League season.

In their absence Guardiola gave a debut to Nathan Aké, newest arrival in a four-man £190m defence that also included Bernard Mendy, Kyle Walker and John Stones. Well, Pep has always been more of a midfielders’ man.

Molineux was another eerie, echoey Premier League ghost ship at kick-off, those empty rows of gold and black plastic extra-poignant given the unusually rousing atmosphere the last time these two teams met here.

In a way Wolves were both the worst possible opponent for City at this stage, but also the most tactically fascinating, a team geared to test how and to what degree they have fixed the problems that afflicted them last season. Most notable of these was a weakness against opponents who break quickly; not to mention those who can keep the ball, take the game deep, and make City fret a little, losing themselves in their own passing rhythms.

It was notable here that City allowed Wolves to do neither in the first half. Fernandinho and Rodri provided a smothering central midfield pivot. And the ball was funnelled with real urgency from flank to flank, with Kevin De Bruyne the great throbbing mobile brain at the heart of every passing sequence.

Arguably City were aided by the spectacle of Adama Traoré playing as a deep defensive right wing-back. Is this a good use of his supreme attacking drive? No doubt the nation’s left-backs would enthusiastically agree. But it is also a position that requires a degree of precision defending, and it was on that right side City made early inroads.

Raheem Sterling wriggled through on goal inside two minutes but took a heavy touch. With nine minutes gone the injured Marcal was replaced by Rúben Vinagre. And for a while City worried away at the Wolves defensive lines, keeping the ball, switching from flank to flank in search of an overload.

With 18 minutes gone it was their right side that forced the breakthrough. De Bruyne showed pretty much the complete midfield hand in the first half: passing, dribbling, shooting, running the entire game, take your pick.

Here he appeared briefly as a winger, sprinting down the right channel then drawing a foul as Romain Saïss slid in, taking both his feet. It was a hare-brained moment from the left-sided centre back. De Bruyne stepped up and smashed the penalty low into the corner.

City just kept on going, moving Wolves around the pitch with a calm severity, waiting for the stitches to come apart. The second goal arrived on 32 minutes from a beautiful team move.

This time it came down the left. Gabriel Jesus dropped deep and played a neat little lay-off to De Bruyne. He slid the ball through a tiny channel into the path of Sterling’s run, the white City shirts spinning into space in concert. Sterling’s pull-back found Phil Foden in front of goal, with time to pause and place the perfect low drive into an unguarded net.

By half time City had taken 68 per cent possession and reduced Wolves to a beleaguered extra in their own game of pass and move. It looked set.

At which point Wolves came back out transformed, playing suddenly without fear and finding all kinds of holes on City’s left flank. Pushed further up the pitch, Traoré finally got away, brushing Mendy aside like a man sashaying through a set of saloon bar doors, and finding Daniel Podence in the centre.

He turned and smacked a shot just past a post. Another sortie down the right saw Rúben Neves’ shot kicked off the goal-line by Kyle Walker.

Wolves were all over City, Podence haring though again but scooping a showy finish on to the roof of the net. How Nuno Espírito Santo must have wished his team had started with this level of aggression.

With 77 minutes gone Fabio Silva came on for his league debut. And within 60 seconds Jímenez had made it 2-1, heading powerfully past Ederson’s flailing hand after Podence had nutmegged De Bruyne and floated a cross to the near post, a genuinely wonderful piece of assist-work.

Wolves pressed hard. City held on, and at the death Jesus made it 3-1 with a deflected close-range finish. - Guardian

1 Seán O’Brien: Anger over my parents’ break-up never left me
2 All in the Game: Klopp’s Amsterdam subs don’t go down well
3 Madness or defiance? The GAA is taking a huge gamble in staging Championships
4 Plenty of positives for Farrell as Ireland hit the ground running
5 Will Connors chops his way to the front of Ireland’s openside queue
Real news has value SUBSCRIBE