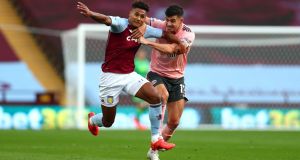 John Egan was sent off for this early challenge on Ollie Watkins. Photograph: Clive Rose/Getty

Last time it was a glitch in goalline technology that denied Sheffield United at Villa Park, this time Chris Wilder’s men were frustrated by an early red card for John Egan and a moment of class from the home team’s new goalkeeper. Emiliano Martínez marked his first appearance since a £20m move from Arsenal by saving John Lundstram’s first-half penalty. Ezri Konsa secured a winning start to the season for Aston Villa by heading the only goal in the second half.

Villa aspire to doing much more than repeating last season’s late escape from relegation and they have recruited accordingly. Before this game they confirmed the £17m purchase of forward Bertrand Traoré from Lyon, and once this game got going, other expensively acquired recruits began to demonstrate their worth.

Martínez’s save just after the half-hour was superb, the keeper flinging himself full-length to his right to paw away Lundstram’s decently struck effort from the spot. Villa’s other two debutants were also quick to make good impressions, with the full-back Matty Cash ensuring a regular supply of useful crosses from the right and new centre-forward Ollie Watkins leading the attack cleverly.

Watkins may be a newcomer to the top flight but he was wily enough to induce a foul from Egan, who was deemed to have tugged Watkins back as the pair raced to be first to a downfield punt from Tyrone Mings. United players protested that the red card was too harsh a punishment but the referee’s verdict was upheld by VAR.

Starting badly is a nasty habit that United seemed to have developed for the new season and must kick quickly. In their opening game the Blades never recovered from conceding two goals in the first six minutes to Wolves; now their task was to get a result despite being deprived of their captain after 12 minutes. The fact that Villa had looked the brighter team even before the dismissal did not augur well for the visitors.

Egan is normally the linchpin of United’s defence and without him they switched initially to an orthodox back four. That had the effect of neutering their wingbacks and helped Villa to establish control. The hosts tried to turn the screw.

Conor Hourihane was frustrated to see a couple of exquisite free-kicks flash across the face of the United goal without any Villa player being able to apply a decisive touch. Watkins had a header deflected wide after a cross by Cash, and then Douglas Luiz brought a comfortable save from Aaron Ramsdale with a close-range header. Although the visiting keeper had not been forced to excel, Wilder tried to defuse the rising danger from Villa by making a substitution just after the half-hour.

The change almost paid off spectacularly. With David McGoldrick withdrawn, Chris Basham was pushed into a more attacking role as the substitute, Ethan Ampadu, slotted into central defence. Basham swiftly caught Matt Targett unaware, dashing in on the left-back’s blindside to collect an excellent pass by Oliver Burke. Targett panicked and tripped Basham, leaving the referee with the simple decision of awarding a penalty. Martinez had enjoyed a serene start to life at Villa Park up until that point and made sure Lundstram did not ruin it.

Villa regain control after in the sense that they hogged possession without being ingenious with it. Tyrone Mings could be heard preaching patience – “Keep doing the simple things,” he roared a couple of times – as Villa probed for openings. United’s 10 men kept them at bay without too much stress. Villa’s movement off the ball was too predictable, leaving their most inventive passers, Douglas Luiz and Jack Grealish, with few options against a determined defence.

Peculiarly Villa’s breakthrough goal came immediately after the withdrawal of Hourihane, whose inviting deliveries had elicited no meaningful response. In his absence Targett took the corner that Mings flicked on, leaving Konsa to leap above Enda Stevens and nod into the net.

The increased solidity of Konsa’s partnership with Mings in central defence was one of the reasons for Villa’s survival last season and the pair looked accomplished again, albeit against opponents who struggled to mount a sustainable threat with a numerical disadvantage.

Grealish, Watkins and Douglas Luiz all had chances to give Villa even more breathing space but shot wide from the edge of the area. Their attack has plenty of room for improvement but, with their defenders continuing to excel, Villa appear to be heading in the right direction. - Guardian