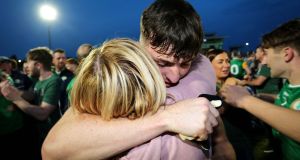 Dungannon became Tyrone football champions for the first time in 64 years after securing victory in a penalty shoot-out, but after the match Foster tweeted: “Significant milestone for Dgn but Covid-19 is no respecter of victories. Other events being responsible. Sport & health will be the losers.

“UlsterGAA need to address this. Serious questions arising from videos.”

Earlier this summer Ulster GAA set limits on the number of spectators attending events - 400 are currently allowed to attend club matches in its six counties. Supporters were strongly advised to wear face coverings at games and bring their own hand sanitiser.