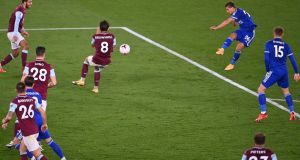 Leicester continued their bright start to the season by ruthlessly exposing the limitations with which Sean Dyche must cope at Burnley. Although Chris Wood opened the scoring, the home side stormed back and won thanks to class Burnley just do not have, plus a little luck, of which Burnley are also short.

Harvey Barnes, James Justin and Dennis Praet found the net while Erik Pieters turned a cross by Timothy Castagne into his own goal, making Jimmy Dunne’s late effort merely a memento for Burnley.

Dyche has not tried to hide his frustration at Burnley’s inability to provide him with any new outfield players during the transfer window and he may have been forgiven for thinking Leicester were trolling him by announcing their own latest signing just before the game. Cenkiz Ünder arrived on loan from Roma, with Leicester ensuring they have an option to make the deal permanent if the speedy Turkish winger proves as big a hit this season as Brendan Rodgers hopes.

Ünder arrived too late to feature here but Rodgers was able to give another outing to Castagne, the £21.5m recruit who made such an impressive impact on his debut against West Brom last week.

The positive spin on Dyche’s plight is that his selection at least had the merit of being straightforward with a raft of injuries, including to both their first-choice centre-backs, meant picking the team was only slightly more difficult than deciding what to wear at a nudist beach.

Still, Burnley have been known to look good when down to the bare bones so they could approach this date with a measure of confidence. They were bold enough to take the lead in 10th minute through Wood.

While Burnley gave a Premier League debut in central defence to 22-year-old Irishman Jimmy Dunne, Leicester had to turn again to a midfielder, Wilfred Ndidi, to serve as a centre-back owing to the absence of Jonny Evans.

The Nigerian closed down Wood like a wily veteran when Robbie Brady released the striker with a quick pass in the fourth minute but Justin was not so canny soon afterwards, getting lost under a looping cross from the left by Charlie Taylor. That allowed Wood to chest down the ball, benefit from a ricochet off the defender and then shrug him aside before driving a shot into the bottom corner from six yards.

Leicester hoped for a reprieve from VAR but the officials seemed to judge the ball had come off Wood’s shoulder rather than lower down his arm.

Leicester continued to pass patiently and in the 20th minute Barnes injected something special. He picked out Jamie Vardy with a splendid pass from deep and hurtled forward. Vardy duped two defenders and then showed tremendous restraint to turn down a chance to shoot and instead feed Castagne. The Belgian, equally selfless, teed up Barnes to fire in the equaliser from 10 yards.

Barnes threatened again seven minutes later but curled a shot over from the edge of the box after snazzy service by Youri Tielemans, who was starting to pull strings beautifully in midfield.

Burnley did not bow down, however, and Brady forced a save from Kasper Schmeichel with a half-volley from 20 yards.

Barnes made Nick Pope work even harder two minutes later, the goalkeeper diving low to his right to tip away the winger’s shot.

Burnley’s injury woes worsened when Brady had to be replaced before half-time. They could be thankful, at least, that they reached the interval with the scores still level.

But luck soon abandoned them altogether. Leicester scored thanks to a cross by Castagne that took a fiendish deflection off Brady’s replacement, Pieters. Castagne, in fairness, had done well to get on the end of a sumptuous pass by Tielemans.

Tielemans and Barnes continued to sparkle but Burnley are nothing if not dogged and they could have equalised near the hour when Jay Rodriguez slipped a pass through to Wood, who scuffed his shot from eight yards.

Justin encapsulated the turn-around when he showed Wood how to finish, guiding a low shot into the net from close range after good work by Ayoze Pérez and Praet.

Dunne kept Burnley’s hopes flickering by bundling a header into the net but Praet soon responded by sending a rocket into the net from 18 yards out. - Guardian

1 Seán O’Brien: Anger over my parents’ break-up never left me
2 Plenty of positives for Farrell as Ireland hit the ground running
3 Ireland braced for a daunting assignment in Paris
4 Will Connors chops his way to the front of Ireland’s openside queue
5 Madness or defiance? The GAA is taking a huge gamble in staging Championships
Real news has value SUBSCRIBE