Commentators look on the bright side in the Tuscany of Ireland

TV View: All eyes on Ibrahimovic as Milan turn the heat up on Rovers in balmy Tallaght 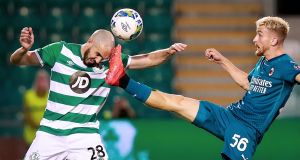 Joey O’Brien of Shamrock Rovers heads the ball as a high challenge comes in from AC Milan’s Alexis Saelemaekers during the Europa League second qualifying round game at Tallaght Stadium on Thursday night. Photograph: Tommy Dickson/Inpho

Just when you thought 2020 couldn’t get any weirder, who should pop up in Tallaght only Zlatan Ibrahimovic. He didn’t come alone, of course, bringing his AC Milan comrades with him for their Europa League qualifier against Shamrock Rovers, but RTÉ only had eyes for the lofty Swede when he arrived at the ground, maybe having just done a bit of window-shopping at the Square.

“Welcome to Tallaght, the Tuscany of Ireland,” read the banner draped over the seats – and, with Dublin on the verge of a Level 3-and-a-bit lockdown, Tallaght is as close as most of the county’s residents will get to Tuscany this year.

No fans allowed in the ground, need it be said, apart from a Rovers diehard who has been a volunteer for the club since even before Zlatan became a twinkle in football’s eye. Martin Genockey beamed so broadly when he told RTÉ’s Six One news that he’d been appointed a ball-boy for the night, there was no need for floodlights – they just had to get him to smile at the pitch. Chuffed, he was, to be there.

Peter Collins welcomed us to RTÉ’s coverage but it was easy to lose concentration once the cameras picked out Paolo Maldini pottering about the place during the warm-up, the man whose facial features appear to have been chiselled by Michelangelo. Now AC Milan’s technical director, the God of All Defending looks like he could still put in a useful 90 minutes, although his poor young lad Daniel, who had travelled all the way from Milan to Tallaght, didn’t make their match-day squad.

Tony O’Donoghue brought us that and the rest of the team news, going all Eye-Italian on us by calling the visitors “Mee-lan”. Then he played us a recording of a chat he’d had with Rovers’ Jack, Stephen and Graham. “Byrne, Bradley and Burke – they sound like a solicitors’ firm,” he said. They do too.

Burke, who was three when Zlatan signed his first professional contract, had made the mistake of looking up his goals on YouTube and now appeared a little bit frightened, but Dan Murray, the former Rovers captain, and Kenny Cunningham saw no reason to be afraid. Joining Peter pitchside, all three men positioned in front of chest-high coffee tables, they reckoned Rovers had enough about them to give Mee-lan a troublesome evening.

Rovers, of course, wouldn’t be getting a second chance either, but the panel’s confidence was admirable

“Jack Byrne and Graham Burke are going to create the goals,” said Dan, the emphasis on the net-busting plural, a nodding Peter noting that, because this wasn’t a two-leg affair, the match having to be settled on the night, “the pressure’s on Mee-lan to do the business because they’re not going to get a second chance”.

Rovers, of course, wouldn’t be getting a second chance either, but the panel’s confidence was admirable, as was, as usual, George Hamilton’s extensive knowledge about referees.

“Adam Farkas is tonight’s official, his first international game was the Faroe Islands v Malta and his wife Eszter is also a top international referee.” All we were missing was his inside leg measurement.

And George, as we know, comes alive when he has foreign names to pronounce, so this game granted him a field day, although he almost lost his teeth when taking on “Hakan Calhanoglu”.

Earlier, Kenny admitted that he calls the Turkish winger “Chan-a-loo-loo”, but George would never be so lazy, so when the fella scored Mee-lan’s second he gave it the full “Cal-haaaaaaan-o-gluuuuuuuuuuu”, his molars nearly landing in Stuart Byrne’s lap.

By then, Zlatan had given Mee-lan the lead (“the inevitable happens,” as George sighed), but if the Eye-Talians thought they could swank their stuff around Tallaght unperturbed, they were mistaken, Rovers making them toil for their Europa League advancement. Even Paolo was sweating a little in the stands, although that might have been down to his mask and the balmy Tallaght Tuscan-like evening.

Final score, 2-0, Chan-a-loo-loo the man of the match. “We respect all teams,” he told Tony after the game, “even Shamrock Rovers”.

May he have got lost on his way out of the Tuscany of Ireland.