Leinster and Ulster meet in Pro14 cracker; Villa to field youth side in Liverpool tie 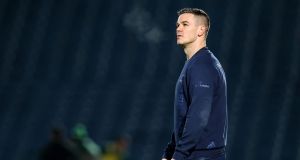 Tonight Leinster welcome Ulster to the RDS in one of the matches of the Pro14 season (kick-off 7.35pm). Dan McFarland’s side travel south currently in pole position in Conference A, with 10 wins from 10 matches. The defending champions are in second place - 10 points behind Ulster with two games in hand - and are looking to bounce back from last weekend’s defeat to Connacht, their first in 26 fixtures. And the importance of the match has been reflected in Leo Cullen’s Leinster selection - Johnny Sexton leads a side of full internationals, with Jordan Larmour returning from injury and Ross Byrne starting in the alien position of outside centre. As Gavin Cummiskey writes this morning, it is a mouth-watering fixture - but the hosts should have the edge: “On paper, Leinster have plenty to spare. In reality, Leinster by whatever margin is determined by a combination of Sexton’s health and Ulster’s physicality.” And one particularly intriguing battle will come between number eights Caelan Doris and Marcell Coetzee, writes John O’Sullivan.

A number of this weekend’s FA Cup fixtures look set to be hit heavily by Covid-19 cases. Tonight Aston Villa are set field a team of youth players as they welcome Liverpool to Villa Park for their third round tie (7.45pm), with Dean Smith’s first team squad and staff all isolating due to a number of positive tests. Southampton could also be awarded a walkover in their tie with Shrewsbury Town, after the Shropshire club also returned a high number of cases. Tonight’s other fixture is an all-Premier League affair, with Wolves welcoming Crystal Palace to Molineux.

7 Colin Farrell: ‘After 20 years of drinking the way I drank, the sober world is pretty scary’

18 Before you buy an electric vehicle, ask: Will I drive it enough to make it eco-friendly?

20 New to the Parish: Abdullah Afghan and Fatima Abdullah arrived from Afghanistan via Pakistan

23 Vaccination of ‘high risk’ citizens against Covid-19 to begin next week, Dáil hears

24 Covid-19: Face masks should not be compulsory for primary school pupils, Hiqa says

28 Irish Times view on the restless state of unionism

37 ‘My husband is unemployed. Where will he go if I leave him for my business partner?’

40 Moses Farrow: ‘I felt inherently like I was a bad kid. The abuse at home reinforced that’