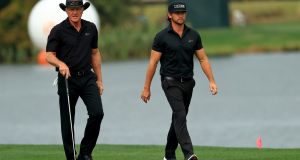 Greg Norman and son Greg Norman Jr. walk up the 18th hole during the final round of the PNC Championship at the Ritz Carlton Golf Club on December 20th. Photo: Mike Ehrmann/Getty Images

Greg Norman is back in hospital in Florida after the Australian golfing great tested positive for Covid-19, the 65-year-old said late on Sunday.

Norman, whose two major titles came at the British Open in 1986 and 1993, had said he tested negative at the exhibition PNC Championship in Orlando from December 19th to 20th but began to experience fever, joint and muscle aches later in the week.

He went into hospital on Christmas Day and returned home to self-isolate on Saturday while awaiting the results of another test.

“I hope this will be my final update on this Covid saga ... back in hospital after getting a positive result,” he said on Instagram, adding he was receiving an infusion of antibodies.

“The path to full recovery. Hoping to be out later today.”

Norman said that despite being fit and strong and having a high tolerance for pain, the “hideous” virus had “kicked the crap out of me like nothing I have ever experienced before”.

“Muscle and joint pain on another level. Headaches that feel like a chisel going through your head scraping little bits off each time, fever, muscles that just did not want to work,” he added.

“Then my taste failed, where beer tastes bad and wine the same ... at times struggling with memory of names and things.”

Norman’s son, also named Greg, had played with his father at the PNC Championship and has already confirmed he and his wife had tested positive.