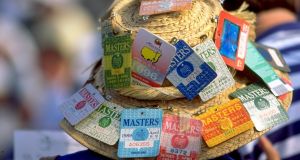 A masters fans displays the past entry tickets of the Masters on his hat. Photo: Craig Jones /Allsport

The ticketing process for the 2021 Masters has been delayed as organisers of the year’s first major seek a way to allow some patrons to return after holding the most recent edition without fans, ESPN reports.

ESPN said Augusta National Golf Club, which is scheduled to host the 2021 Masters from April 8-11th, updated patrons of the delay amid the ongoing Covid-19 pandemic in an email sent on Tuesday.

“As planning continues on how to stage the 2021 Masters Tournament safely and responsibly, we would like to inform you that Augusta National is delaying the ticket process for Patron Series Badges, which traditionally begins January 1st,” the club wrote in the email.

“Our intention is to communicate our decisions for the 2021 Masters to all patrons of record by the end of January. No further action is needed with your account at this time.”

Augusta National Golf Club did not immediately respond when asked to comment on the ticketing process.

As the only permanent home for one of golf’s four major championships, the allure of Augusta National has made Masters tickets among the most coveted in all sports.

The Masters, which is traditionally held in early April, was postponed in 2020 until November due to the coronavirus pandemic and took place without patrons, which meant only club members, media, family and close friends of the players were on site.

Fans who had tickets for the 2020 Masters were given the option of deferring their use until 2021.

Augusta National Chairman Fred Ridley said before last month’s Masters that a decision on spectators at the 2021 event would be made based on the best information possible and that he hoped the “tournament in April will be more normal than it is now”.