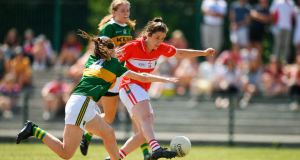 After the fallout, there’s the football. And sometimes after a fallout, two types of football can take place – a disaster or a classic. Cork v Kerry always has a historic rivalry, steeped in stories that are passed on from grandparent to grandchild and so on.

There are some highlights and before the Munster finals, my mother and I were looking at two photos, one of me in Fitzgerald Stadium in the early 00s celebrating a Cork goal. Imagine, a limbless child being thrown in the air by her father. A photographer’s dream or a social care workers nightmare?

Then a more recent photo of the 2016 Munster final in Killarney Legion GAA grounds. Cork had just beaten Kerry, and while my dad refrained from throwing me around, I was looking at a picture of me and some of the Cork players… only the 10 All Irelands in that photo, me contributing a total of nothing.

Bizarrely, my mother and I were preparing for the Munster final on a Saturday afternoon, something we both found outrageously odd. Typically, it’s on a Sunday of course and even more weird, I was going without my father. He’s still alive, don’t worry, but we were on a sort of strike. We all wanted to be a part of history, to sit down in the new Páirc Uí Chaoimh for numerous hours taking in the football. But it wasn’t to be. And that’s fine too.

You see, these Cork ladies deserve that bit more. They are hands down the most successful team I’ve grown up watching, not just in Cork but in Ireland. A few weeks ago, I wrote about the Arsenal ladies and the Unstoppables but eventually there are no superlatives left to describe this Cork team. They have rewritten history time and time again, but the only narrative that was written on them was how shameful it was to have them play in Cork Institute of Technology.

Yes, it was bad and as a Cork woman I am ashamed that some of the most talented and skilful players the game has seen have never set foot in the real home of football. Yes, it is a crime against humanity that two players with so many medals they can keep the polishing industry going have never stepped foot in Páirc Uí Chaoimh. It was wrong, sad, unjustifiable.

Juan Manuel Lillo had a fantastic quote before the beginning of the 2013 La Liga that sometimes the garnish can eat the steak. For the ladies on Saturday afternoon, the steak fought back.

The first half saw Kerry on top, with well-worked goals from Sarah Houlihan in a brilliant team move involving Andrea Murphy and Amy Foley providing the assist. Foley herself got a goal which, to be honest, made everyone in CIT that little bit nervy. What we all did not know and expect was the trick card Ephie Fitzgerald had up his sleeve. While the postmortem was taking place in the stands in CIT, the trump card was about to be used. On came Saoirse Noonan, whose name you should recognise from her dominating season with Cork City WFC.

And Noonan did what Noonan does. After Ciara O’Sullivan earned a penalty, up stepped the Republic of Ireland international and as cool as a cucumber scored a penalty. O’ Sullivan got her second goal, and Noonan officially got the lady warming up her vocals as her goal ended the game.

The TG4 senior championship is now officially taking shape. Groups of death have been established and the heads are back down preparing for the main course. There’s still more silverware to be won and more records to be broken.

As for the Cork footballers, well, the story of the day wasn’t regret and upset; ironically, the shock and regret was within the walls of Páirc Uí Chaoimh. Outside the walls, there were murmurs and discussion of how the ladies were once again excluded. Has common sense left officially? Common sense may be lacking but the hunger and desire to reclaim their crown indeed has not disappeared.

The Cork ladies did what they do, what they have always done: parked the exterior discussion and noise and rise up above it. Just like true champions. For once, the garnish did not eat the steak, the steak fought back.