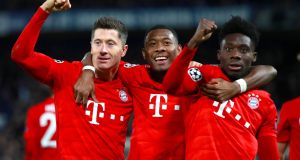 In his column this morning Gordon D’Arcy has picked the bones out of Ireland’s defeat to England last weekend, and has suggested a change of personnel is necessary if Andy Farrell’s side want to avoid the same fate when they travel to Paris in the final round of the Six Nations. He writes: “It was all too predictable. The same pack, and largely the same team, that failed at the 2019 World Cup could not turn the page,” and he says that, “change was advisable before this moment, now it is inescapable.” D’Arcy believes that while Farrell should avoid anything knee-jerk, he must freshen his side up before the trip to the Stade de France on March 14th - especially in the backrow: “Instead of stewing over who should make way from Stander, O’Mahony and van der Flier, how about sitting them all down and taking a good look at Doris, Max Deegan and Will Connors?” One player who is beyond reproach however is James Ryan, who delivered another mighty performance in the face of an English onslaught: “Ryan was picking all the fights and, to my eyes above the halfway line, he was the only angry Irish man. That’s not good enough at Twickenham.”

Elsewhere and Ireland’s penultimate Championship clash against Italy on Saturday March 7th is under threat due to fears over the coronavirus, with Minister for Health Simon Harris recommending the game be postponed. Harris's recommendation came on the RTE Six One news yesterday evening with the IRFU later releasing a statement saying they were seeking “an urgent meeting with the Irish government to discuss the matter further.” That meeting is set to take place today, with fears arising over the 2,500 tickets which have been sold to Azzuri fans as well as the high number of flights from Dublin to affected areas in Italy. If the game does go ahead, Ireland will be without prop Cian Healy, who will miss the rest of the Six Nations with a hip injury he sustained in the 24-12 defeat at Twickenham.

1 Coronavirus: More ‘striking’ evidence BCG vaccine might protect against Covid-19
2 Una Mullally: Leo Varadkar’s mask drops again
3 Genetics shed light on origins of Irish strains of Covid-19
4 Irish doctors on getting Covid-19: ‘In 90 minutes, I deteriorated quite rapidly’
5 Last couple in paradise: The Covid-19 honeymooners stranded in the Maldives
6 Europe prepares to ease coronavirus lockdowns
7 Coronavirus: Over 700,000 people receiving unemployment payments from State
8 Coronavirus: Primary school measures are reinforcing inequality, report says
9 Coronavirus now under control in Norway, says health minister
10 I nearly fainted at the sight of the cream. How can you call that carbonara?
11 Restarting Ireland: When and how will we ‘get back to normal’?
12 Coronavirus response: Air passengers could lose refund right under Government plans
13 Coronavirus: Varadkar returns to practising medicine to help during crisis
14 Donald Trump’s clown car administration has put the fear in all of us
15 ‘It’s just stuff’: Doctor leaves all possessions behind in Australia to return to work in Ireland
16 Consultants want private business exempt from national effort to save lives
17 Coronavirus ‘disproportionately impacting’ Ireland’s Roma community
18 Upbeat in the lockdown: Leo’s art-bot portrait, and six other ways we’ve stayed happy today
19 Tuberculosis vaccine ‘potential game-changer’ in Covid-19 fight
20 Dublin criminal Lawlor may have been shot dead by man who owed him money
21 Róisín Ingle: How I met Matt Damon. And it wasn’t in Dalkey
22 State examinations and fairness
23 Rejoining medical register will allow Varadkar ‘take temperature of health service’
24 Nurse who took opiates and marijuana while on duty suspended for 12 months
25 Coronavirus: Plans to move 600 consultants into public system hit obstacle
26 Surge in unemployment payments to more than 700,000
27 Covid-19 has proved worse than the film-makers imagined
28 Robbie Lawlor profile: A feared criminal with a long list of enemies
29 What is Houseparty, the app everyone’s talking about – and not in a good way?
30 Conor Wilmot ‘found something on the internet that went wrong’
31 ‘Childbirth can’t be postponed’ – how Holles Street is coping
32 Netflix has revealed its most-watched content. You might be surprised
33 Singer Duffy reveals rape ordeal to ‘help others who have suffered the same’
34 ‘Dad got the Spanish flu’: Clonmel man (104) sees historic lessons
35 July’s British Open at Royal St George’s is cancelled
36 Ready, steady, cook this 10-minute pasta perfection
37 Coronavirus lockdown steps could remain into winter, says expert
38 Ken Early: Mick McCarthy II was no blockbuster, more of a flop
39 Folk singer and broadcaster Mary McPartlan dies at 65
40 An ‘Asian flu’ pandemic closed 17 Dublin schools in 1957
Real news has value SUBSCRIBE