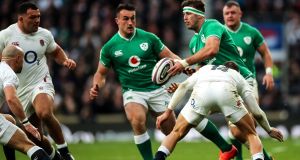 The case for promoting Caelan Doris and Ronan Kelleher to the starting lineup looks stronger after Twickenham. Photograph: James Crombie/Inpho

There was always the likelihood that Andy Farrell and his coaching team would have made changes for their penultimate Guinness 2020 Six Nations game against Italy. Particularly with the finale against France in Paris seven days later, this penultimate match always afforded the opportunity to delve further into the squad.

The intention clearly had been to employ Caelan Doris from the outset only for his head knock in the opening four minutes against Scotland to delay that process. Ronan Kelleher might also have seen more action to date but for the fractured hand he suffered in the Northampton-Leinster game in early December.

Now, after their positive impacts off the bench in the final quarter against England, the case for promoting them against Italy looks more compelling, with Iain Henderson also likely to return and John Cooney knocking on the door.

David Kilcoyne may start as well, although word is that Cian Healy’s hip injury is not as serious as feared. A squad update will be issued today before they reconvene on Wednesday evening, culminating in an open session with the high-flying Under-20s at Energia Park (tickets for which are on sale in Ticketmaster) on Friday.

Rob Herring put in a big shift at Twickenham and his darts have been good, but Kelleher provides more ballast in his carrying game. Likewise, Peter O’Mahony and CJ Stander, but Doris not only looked the part with his carrying, his inside pass to the supporting Cooney also showcased his abilities as a distributor.

Granted, the game was already pretty much done when the bench was unloaded, and a trek to the Stade de France when France will be seeking their first title in a decade and possibly a Grand Slam as well is an altogether different challenge from playing Italy at home.

However, the nature of Ireland’s 24-12 defeat by England in Twickenham has, Farrell admits, given them more “food for thought” before he admitted: “But we have always had that thought in the back of our minds anyway.”

“We won’t assess it rashly, we’ll make sure we will do the right thing by the team and do what we have to do to get the right performance against Italy.”

Despite the relative improvements late on, Ireland’s attacking game was pedestrian in the first half and for chunks of the second, with intended carriers taking the ball standing, and Farrell agreed they were too static.

“I would, although the speed of the ball we created was poor in the first half and we were sending them down into dark alleys and it was giving them [England] confidence; two-man hits and going back through the ruck and we were hit behind the gain line.

“We played with a little bit more width in the last 20 minutes when the game was over really, and we got on the front foot and it is quite easy to win collisions on the back of that. But having said that you still have to do it and I thought Caelan did well when he came on, he hit the line really nicely at times and Ross [Byrne] did pretty well, John [Cooney] did pretty well etc, but I suppose they would sense an opportunity on the back of things not going pretty well for us as a team. Yeah, it’s pretty disappointing to play your best rugby when the game is over.”

Farrell lamented how England were able to gain access in Irish territory from which the home side’s two tries emanated. Aside from England’s general kicking game, whether finding space in behind or being better able to contest in the air, this started, almost literally, with the kick-offs. George Ford’s restarts seemed to have more hang time, enabling England’s chasers to hit hard and pin Ireland inside their 22.

“I mean, why does somebody get so much access to be able to win those clear balls in the air? When we kick off, why don’t we get them man and ball? It’s little bits like that which add up to giving them access into the game.”

The Irish maul also had little purchase against the disruptive English pack. Farrell conceded as much although he was seemingly not best pleased with some of the officiating in this regard.

“It was difficult enough at times to set things up; there are different reasons for that as well.”

The Irish head coach also looked aggrieved when informed of Eddie Jones’s post-match assertion that had it been a cricket match England could have declared at half-time.

“Is that what he said?” Farrell responded. “There are plenty of teams who would have been here, and us included in the past that when England would have obviously been brimming to go in at half-time, they would probably have thought they would try and get to a cricket score but they didn’t. We can give ourselves credit for that.”

Ireland have gone from 4/1 to win the Six Nations at the outset in to 9/4 after the opening two rounds back out to 8/1 third favourites. Denying England a fourth try to move one point above Ireland has at least ensured the title is not mathematically further out of reach.

While the notion of Ireland winning the title looked fanciful in the extreme for much of Sunday’s game, Farrell believes they can regain the momentum they generated in the opening two rounds.

“One hundred per cent, I definitely do. We are in the same position as a few other teams and we need to be disappointed with this. Some might say the scoreline flattered us, but at the end of the day it is a 12-point margin. We could have rolled over against a side that were desperate [for a win] in England, but we didn’t and we gave ourselves as good a chance as any.”