‘We have nine games left, and we have to win at least seven,’ says coach Andy Friend 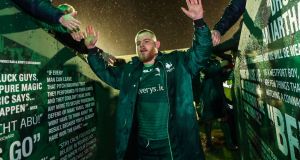 It’s “business as usual” for Connacht Rugby has they head to South Africa on Wednesday evening with their Pro14 ambitions on the line.

Andy Friend’s travelling squad of 24 had a meeting on Tuesday concerning the coronavirus ahead of Sunday’s crunch fixture against the Southern Kings in Port Elizabeth, and will be following medical advice.

“The game is slightly affected because we had a Italian referee and he won’t be travelling, so it will be a local referee,” says Friend, “So, with Zebre and Benetton games being postponed, it will start to to become a pretty full calendar.”

Connacht have yet to travel to Parma and Treviso this season, which could become key fixtures if Connacht ambitions are still intact after Sunday’s South African joust.

“We’ve got our backs right up against the wall,” says Friend, following a disappointing defeat in Edinburgh.

“We have nine games left, and for us to do what we want to do [home semi-final], we have to win at least seven. No one is shying away from it. We know what is at stake and it is now for us to go and do that. It is stage one of nine.”

Connacht have not been helped by the loss of tighthead Finlay Bealham, who has already undergone ankle surgery after being trapped at the bottom of a ruck in Murrayfield on Friday night.

“He’s had surgery and is in good spirits, but it’s going to be 12 weeks, unfortunately. Our plans are still to be playing by then, so if we can get him back fresh and ready to go, it would be a big boost.”

Friend heads to South Africa frustrated after the 41-14 loss in Edinburgh, particularly as it followed Connacht’s nilling of Cardiff.

“What is frustrating is not performing at our best. Our preparation was excellent and our head space was good, having beaten Cardiff 29-0, but if we are to be the team we want to be, we have to beat them. The message is, we can’t change it, we can only dictate what we do from here on in. We know where we sit, and can’t afford any slip-ups.”