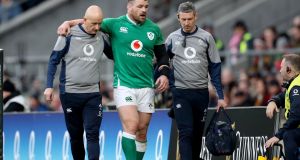 Cian Healy will miss the remainder of the Six Nations Championship as a result of a hip injury he sustained in Ireland’s 24-12 defeat to England at Twickenham on Sunday.

The Leinster loosehead prop sustained the damage at a ruck 25 minutes into the first half of the match and was replaced by Dave Kilcoyne. Healy will not be available for Ireland’s remaining games against Italy at the Aviva stadium on Saturday week and France at the Stade de France on Saturday, March 14th.

Kilcoyne, along with Ulster’s Jack McGrath, are the obvious candidates to cover loosehead prop, while Andrew Porter, who started his career there, could also be an option.

The 30-year-old McGrath won the last of his 56 caps, when introduced against England in a World Cup warm-up match last August, while Kilcoyne understudied Healy in this season’s Six Nations Championship to date, coming on in the victories over Scotland and Wales. The Munster prop’s last start was in the World Cup match against Russia in Japan last October.

Ireland head coach Andy Farrell announced a 28-man squad that will convene on Wednesday for a two-day training camp in Energia Park, Donnybrook that includes a training match against the Ireland Under-20 team on Friday that is open to the general public. Tickets can be purchased on ticketmaster.ie.

The postponement of Ulster’s Guinness Pro14 match against Benetton in Treviso this weekend facilitates outhalf Billy Burns, centre Stuart McCloskey and props, McGrath and Tom O’Toole remaining with Ireland for the two-day camp.

Iain Henderson returns to the squad after missing the England match following the birth of a son last week, a second child for the secondrow and his wife, Suzanne. Will Addison will continue his rehabilitation from injury in Belfast.

Farrell also released six other players back to their provinces. Leinster, who face the Glasgow Warriors at the RDS on Friday night, will be able to call upon flanker Will Connors, number eight Max Deegan, scrumhalf Luke McGrath and wing Dave Kearney.

Munster head coach Johann van Graan can include centre Chris Farrell and flanker-cum-number eight Jack O’Donoghue for the Pro14 game against the Scarlets at Thomond Park on Saturday.

Andrew Conway who went off for a HIA against England and Jordan Larmour, who picked up a bang in that match and was replaced by Keith Earls at Twickenham have both been included in the training camp this week.

The Ireland Under-20s are currently unbeaten in their Six Nations, the latest victory a 39-21 victory over England at Franklin’s Gardens. Noel McNamara’s side’s next assignment is against Italy at Musgrave Park on Friday week (7.15).

A beautiful, happy accident - Moneyball is the best sports movie ever 10:00
Michael Walker: Carrying space and the benefits of learning to stand still 08:00
Matt Williams: We all need a bit of Bud Maher’s resilience right now 07:00
Ian McKinley: ‘You do take for granted the simple things in life’ 07:00
Reality Bites – Tales from the new normal: Caitríona Cormican 06:00
Here is your handy guide to sport on television this week