Test occurred before match against Zebre near where coronavirus outbreak started 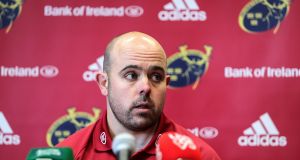 Munster rugby players and officials were fever-tested when they arrived in northern Italy last Thursday to play Zebre but did not have to undergo any other procedures in relation to the coronavirus outbreak which broke out in that region.

Ulster’s game against Benetton Treviso in Italy this weekend has been postponed and Munster defence coach JP Ferreira said on Tuesday that their Pro14 clash against Zebre last Friday night might have been impacted if it had taken place a day or two later.

The coronavirus outbreak emerged suddenly on Friday in Codogno, a town south of Milan.

Munster’s clash with Zebre had been switched to a football ground north of Milan, Stadio Giovanni Mari in Legnano, in a promotional exercise which, as it transpired, kept them further away from the impacted area.

“We only went through the test as we got to the airport,” said Ferreira. “They just did a fever test when we arrived. There was nothing when we left, also nothing in Dublin when we came in. That was all clear.

“It might be different now. I know that the town that’s close by and I know one South African player there and quarantined right now because of what happened. But nothing on our side,” added the South African.

Ferreira said that the coronavirus could have a big impact on the Pro14 and other sporting events but that it was out of their control.

“It could disrupt and I know this weekend’s game is called off. There are still questions on what the points are going to look like and is going to be like the World Cup when you get two points each?

“But then you go into Europe, getting into Europe, and qualifying for that, so there is a bit of chat around that at the moment from the powers that be. But there is nothing we can do.”

Meanwhile, Ferreira, whose side are preparing for a crunch Pro14 clash with Scarlets at Thomond Park on Saturday, said they were hopeful that Joey Carbery’s spell on the sideline would not be extended by him undergoing ankle surgery while recovering from a wrist problem.

But he said it’s difficult to put a timeline on when the 24-year-old might return.

And he said he wasn’t in a position to clarify if Carbery would have undergone the ankle surgery if he wasn’t already sidelined with the wrist issue.

“I can’t answer that. I actually don’t have any info on that. All I know is that they did a scan, if they took out a bone or had to fix something I’m not too sure, I can’t put my finger on it, but they just decided to do it while he’s rehabbing his wrist,” he added.