Noel McNamara’s side run in six tries in brilliant performance 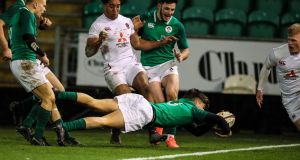 A stunning performance, underpinned by six tries, saw Ireland claim a third successive victory in the Under-20 Six Nations Championship at Franklin’s Gardens and edged the reigning Grand Slam champions towards a tilt at repeating that feat.

It is a brilliantly coached side that play a superb brand of rugby and Noel McNamara’s team stayed true to their principles, using the full expanse of the pitch and the football ability of an impressive group of players laden down with talent.

It would be churlish to single out any player but captain David McCann led the team brilliantly, ably assisted by his backrow cohorts, Seán O’Brien and Alex Soroka. Thomas Ahern excelled scoring two tries, Brian Deeny was arguably the man-of-the-match and the frontrow were outstanding.

Ireland were brilliantly served at halfback, centre too, while the back three gave the hosts a torrid time with the ball in hand. The visitors performance in the opening 40 minutes was a joy to watch and they were far from flattered by the four-try broadside with which they hit their hosts. It could have been more but that’s a minor quibble when weighed against the quality of the rugby.

The home side were penalised after four minutes and outhalf Jack Crowley tapped over the penalty. England responded in an emphatic manner, initially they turned down a kickable penalty and instead went to the corner. It proved to be the correct decision as gargantuan number eight Rusiate Tuima took three tacklers to bring him down, which allowed secondrow George Hammond to power over from a couple of metres out.

It was very much against the run of play. Ireland’s inspirational captain McCann lost control of the ball before he dotted down on 12 minutes and so the try was ruled out following a consultation with the television match official Neil Patterson.

It proved a short respite for the home side. On 19 minutes Ireland won a scrum penalty, kicked to the corner, hammered up on the fringes and once again got to a couple of metres of the line. But this time debutant Soroka demonstrated great leg drive to force his way through two tackles and get the ball down on the line. Fullback Oran McNulty’s mini-break had been the catalyst.

The nuance in the Irish attacking patterns, the fluency, pace, width, angles of running, and power of the carriers was causing serious problems for England.

Ireland claimed a second try on 27 minutes and it was a humdinger, the visitors once again getting so much currency down the short-side. But it still required a lovely offload from O’Brien and Ethan McIlroy’s wonderful pass behind his back, as he was bundled into touch, found the supporting Hayden Hyde, who touched down. Crowley’s conversion from close to the touchline was a gem to put Ireland 15-7 ahead.

The third try was another homily to the hard, direct carrying of the pack, supplemented by footwork in contact and the balance and lines of running from the Irish backs. McNulty made it halfway through a gap, McIlroy’s feet took him past three tacklers and Ahern, with a little assistance, barged over.

Crowley converted and then departed for a HIA, the victim of a no-arm tackle in the build-up that should have been punished. Ireland weren’t finished, the pack once again getting them into the English 22 and then Hyde’s superb offload allowed McIlroy to scamper over in the corner in first-half injury time.

Replacement outhalf Tim Corkery kicked a superb conversion and at 29-7 and with a four-try bonus point secured at the interval, the visitors were in a strong position. But as England have shown in their previous two games, they are a good second-half team and with the addition of some ballast from the bench, they made quick inroads into the deficit.

Tries from Hugh Tizard and Theo Dan, both converted by George Barton came either side of a breakaway effort from replacement Max O’Reilly, the product of a sweeping Irish counterattack. England were back within two scores at 34-21 and there was still a quarter of the match to go.

Ireland were living on their wits, and in particular the breakdown work of Brian Deeny and McCann, who came up with two brilliant steals. That changed in the 72nd minute when replacement Tom Stewart latched onto a loose ball, linked with McNulty and Ahern was on hand to grab his second try, his final act of the match.