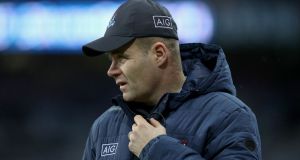 This spring has brought quite a contrast between the leagues. As anticipated, the hurling competition has been undermined by the decision to compose Division 1 of two mixed-ability groups, which has merely guaranteed the following outcomes.

None of the elite will be troubled by the spectre of relegation, whereas the aspiring counties are to be treated like the fat lobster in the restaurant tank – taken to the best tables and stunned with a silver hammer before being discreetly returned to the water to wait for the next opportunity to “improve their game”.

Laois blazed a trail in last year’s championship by beating Dublin in the All-Ireland preliminary quarter-final but there’s a long road ahead before that becomes anything other than an exception proving the rule.

So the hurling league wends its way to a conclusion, and all the while its football equivalent is providing, as usual, compelling matches between the top counties – much as the hurling did until the decision to restructure.

The football is different, though, because it has been running a settled format for 13 seasons. Based on four hierarchical divisions, there’s no doubting Division 1 as the top stratum, but there is plenty of merit-based mobility among all of the other counties.

There are plausible arguments that the whole format is too elitist and the strong are getting stronger, with the inner circle becoming increasingly inaccessible to others.

Former Meath selector and footballer of the year Trevor Giles made a characteristically incisive point last year when asked about his county’s paradise regained, having secured promotion back to the top flight after 13 years. “It’s not really a top eight,” he said. “It’s more a top six.”

He may even have been guilty of rare exaggeration in that the only counties to have avoided relegation since the new world dawned in 2008 have been Kerry, Mayo and Dublin.

That high level of consistency is reflected in the stark statistic that, of the 40 All-Ireland semi-finalists in the past decade, the three named counties account for 25 of them. That’s three out of 11 counties taking up 62.5 per cent of the last-four places.

Tie at the top

The theory of an elite within an elite is further substantiated by the fact that apart from Cork in 2016, no county relegated from Division 1 in its 12 years of existence has spent more than three seasons in it.

The model of having to win your way up isn’t an uncomplicated narrative of pandering to the strongest, as it can be equally argued that in recent years, counties such as Donegal, Monaghan, Galway and Roscommon all enhanced their championship challenge by improving during the league.

This year’s moves to date, halfway through the current competition, see an interesting tie at the top between All-Ireland champions Dublin and Galway, both under new management but with the crucial distinction that Dessie Farrell has a hard act to follow whereas Pádraic Joyce gets the job while his county’s stock is pretty undervalued.

Dublin have done well to date. Farrell has prioritised spreading the net more widely, and a number of new faces have seen action – as well as an older one, with Craig Dias’s selection after eight years sending out a signal that whatever age you are, the door remains open.

Progress on the field has been fitful but performances resilient. Reminiscent of 2017, when Dublin extended their unbeaten run to a record 36 matches, but along the way scrambled three draws to preserve that status, the current campaign has seen bad starts needing to be overcome and breathless finishes. But Farrell isn’t giving the impression that this is his priority.

Whereas not madly experimental, Dublin’s line-ups have been significantly under-strength, and it must be reassuring for the new manager to see the antipathy to losing burns as brightly as ever.

Having shown his ability to maintain cruise control at this time of the year, the Dublin manager’s next task will be to show how effectively he can get his first-choice team up the gears this summer.

Galway have attracted most attention, but it as well to remember that the county also topped Division 1 two years ago and was unbeaten in regulation matches.

Drilling a little below the surface of those statistics illustrates why there’s been greater excitement this time around. Former manager Kevin Walsh sacrificed public acclaim and popularity by trying to prioritise defence whereas his successor, Pádraic Joyce, is perceived to have loosened the leash.

The extent to which Joyce has successfully revived the county’s creative attacking DNA remains to be seen but whereas the Galway of 2018 had the meanest defence in the top half of the league, their forwards were only the fourth most productive.

To date, Galway are top scorers in the entire league and have, with Monaghan, the joint-best defence in Division 1.

The problem for Joyce, who has deftly handled the snowballing plaudits, is that whereas the league is a great testing ground, the real tests follow. Kevin Walsh arguably never fully recovered from losing to Tipperary in 2016, but his biggest stumbling block was that when the stakes got really high, his stated priorities stalled.

Championship exits against Kerry and Dublin in 2017 and 2018 were by stiff margins – eight and nine points – after performances that a casual observer would have been hard put to say were obviously defensive in their intent.

With a strong reserve of quality under-age footballers coming through, Galway would be a very welcome long-term addition to football’s top table but Joyce and his management know well that there’s still a fair bit to be done before then.

1 Gerry Thornley: Changes to tackle laws could transform rugby by time of next World Cup
2 Sky Sports customers set to save on bills until Premier League returns
3 My favourite sporting moment: Phil Mickelson’s miracle shot at the 2010 Masters
4 Jack Grealish needs to show that his remorse is real this time
5 USA Rugby files for bankruptcy as revenues dry up
Real news has value SUBSCRIBE

Jack Grealish needs to show that his remorse is real this time 12:13
Tottenham give 550 non-playing staff a 20 per cent pay cut 12:14
Sky Sports customers save on bills; rule changes could change rugby utterly 07:25
Uefa meet to re-evaluate hopes of finishing current season 06:48
Gerry Thornley: Changes to tackle laws could transform rugby by time of next World Cup 07:18
Here is your handy guide to sport on television this week