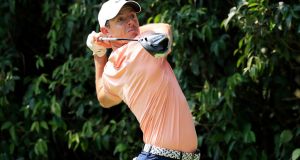 Rory McIlroy plays his shot from the second tee during the final round of the World Golf Championships Mexico Championship at Club de Golf Chapultepec. Photo: Cliff Hawkins/Getty Images

R&A chief executive Martin Slumbers is confident “common ground” can be reached on all sides of golf’s distance debate.

Advances in fitness and golf equipment technology have seen players hit the ball further and further, leading to courses being lengthened in an effort to continue to test the world’s best.

Golf’s governing bodies announced earlier this month that they intend to break the “ever-increasing cycle of hitting distance”, but admit it could take years before solutions are found.

The USGA and R&A will assess the potential of a local rule which would allow tournament committees to “specify use of clubs and/or balls intended to result in shorter hitting distances,” a move welcomed by world number one Rory McIlroy.

However, David Maher, the chief executive of leading equipment company Acushnet, believes the conclusions of the distance report “undervalue the skill and athleticism” of players and that current equipment regulations have been “effective in setting upper limits” on performance.

“We need people to express their views and have a meaningful dialogue. I will be seeing David (Maher) in due course,” Slumbers said. “Not everyone is on the same side and that’s fine.

“We have a very clear protocol of how to deal with the industry. We will follow that I am sure we will get this right together and sort out what we think will be the right solution.

Speaking ahead of the recent Genesis Invitational, McIlroy said he would be happy to accept further limitations on equipment at the elite level of the game.

“If they want to try to contain what we do, as touring professionals, I’m all for that,” McIlroy said. “Selfishly I think that’s only a good thing for the better players.”

Asked about McIlroy’s comments, Slumbers added: “It does not surprise me. Rory is a very thoughtful person who understands the history of the game.

“He understands the point about the balance of skill and technology. Rory will back himself to still be world number one.”