Frank Lampard’s side put to the sword at Stamford Bridge 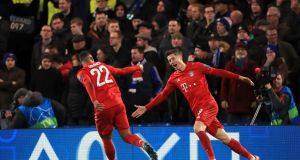 This time Bayern Munich finished with the authority of a side with no interest in letting Chelsea off the hook again. The gulf in class was enormous from beginning to end and, for Chelsea, it is unlikely to feel like anything more than a sightseeing exercise when they return to the scene of their greatest triumph for the second leg on 18 March. The tie is surely done.

Bayern, their place in the last eight of the Champions League all but secured after a devastating second-half display, acted like they were on a mission to erase the memories of their inexplicable defeat to Chelsea in the 2012 final. Two goals from Serge Gnabry and another for Robert Lewandowski sealed victory for the Bundesliga pacesetters, who played the dying stages against 10 men after Frank Lampard’s side lost Marcos Alonso to a late red card.

For all the references to Bayern’s agony and those unforgettable heroics from Petr Cech and Didier Drogba on that famous night in Munich eight years ago, it was worth remembering that Chelsea started this tie as underdogs for a reason. Lampard told his players that they had to be prepared to suffer for the cause on the eve of the game and that prediction looked astute during an awkward opening for Chelsea, who could have been out of it well before half-time.

They conceded territory and possession from the first whistle. Bayern pressed aggressively from the front, which has been their way since replacing Niko Kovac with Hans-Dieter Flick in November, and it is not an exaggeration to say that they could have scored five times during the opening period. The Germans controlled midfield thanks to the subtle touches of Joshua Kimmich and Thiago Alcântara, who was calm under pressure, and danger flared whenever Lewandowski dropped deep, pulling away from Chelsea’s back three to link with Müller and spread the play out to Kingsley Coman and Gnabry on the flanks.

Chelsea looked startled by the way the man on the ball always seemed to be surrounded by two red shirts. Bayern set up camp in their half and there was less than a minute on the clock when Jorginho cheaply conceded possession near his own area, allowing Müller to test Willy Caballero with a low drive from 18 yards. The tone had been set.

In an echo of 2012, however, Bayern struggled to capitalise on their dominance. Coman ran behind Alonso and Antonio Rüdiger on the right before firing wide. Müller placed a free header against the bar and fizzed a fearsome effort narrowly wide. As for Lewandowski, he was encountering frustration in his attempts to end a run of six knockout games without a goal. Twice Bayern’s top goalscorer burst behind the Chelsea defence; twice he was denied by Caballero, who was making his first appearance in the Champions League since Manchester City’s 3-1 defeat to Monaco in March 2017.

Chelsea, using the 3-4-2-1 system that brought them victory over Tottenham last Saturday, somehow found the resolve to dig in and make a game of it. Mateo Kovacic started to enjoy himself in midfield and there were hints of menace from Mason Mount and Ross Barkley, both of whom were working hard to support Olivier Giroud. There were promising flickers from Barkley and, improbably, Chelsea could have snatched the lead when Alonso, attacking from left wing-back, skipped round Benjamin Pavard. Manuel Neuer pushed the Spaniard’s effort away.

As the interval approached, however, Lampard must have been wondering if sticking with Giroud instead of bringing back Tammy Abraham was the right call. While Giroud impressed against Spurs, his lack of mobility allowed Bayern’s centre-backs, Jérôme Boateng and David Alaba, to squeeze the play. Bayern knew they were unlikely to be inconvenienced by balls over the top and, on the rare occasions when they were forced to turn and chase back, the German champions were able to rely on the astonishing recovery speed of Alphonso Davies, their 19-year-old left-back.

Bayern simply needed to stay composed in the final third and they took control with a spectacular four-minute burst at the start of the second half. Lampard knew the slightest misstep would be punished and so it proved when a slip from César Azpilicueta led to the opening goal for Gnabry. Azpilicueta could only watch from the turf as the former Arsenal winger slipped a lovely pass through to Lewandowski and, instead of shooting, the striker outwitted Caballero with a beautifully disguised ball back to Gnabry, who sidefooted into the empty net.

The same combination made Bayern’s second, Gnabry playing another one-two with Lewandowski before finding the far corner. Lewandowski, assisted by the brilliant Davies, soon got his goal.

Chelsea, who will be without the suspended Jorginho in the second leg, had been blown away and Alonso was sent off after VAR spotted an elbow on Lewandowski. – Guardian