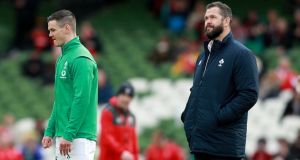 The Ireland versus Italy rugby international should not go ahead next month due to the risk posed by the coronavirus, Minister for Health Simon Harris has said.

The Department of Health’s National Public Health Emergency Team recommended the game’s postponement at a meeting on Tuesday afternoon.

The Irish Rugby Football Union (IRFU) said it was seeking “an urgent meeting” with Mr Harris “as to the specific reasoning behind calling for the cancellation of the Ireland v Italy Six Nations fixture in the context of the Government’s overall travel policy to and from Italy and other affected countries.

“Until such time as the IRFU has had contact with the Minister and gets an understanding of the government’s strategic policy on travel to and from Ireland and the cancellation of mass gatherings, it is not in a position to comment further.”

Mr Harris said it was the clear view of the team that the match should not proceed on public health grounds, with a large number of people due to travel. He said his officials would be contacting the Irish Rugby Football Union in relation to its recommendation.

The advice was based on the “rapidly evolving nature of the outbreak in northern Italy, and the consequent risk of importation of cases into Ireland, were the match to go ahead,” Dr Tony Holohan, chief medical officer in the Department of Health, said.

Italy has reported over 300 cases of coronavirus and 11 deaths in the northern part of the country in recent days; the virus has also been exported from Italy to neighbouring countries and to Spain.

The Department of Foreign Affairs is also to update its travel advice following the NPHET meeting for a number of areas affected by the coronavirus outbreak. Whereas existing advice on travel to affected areas has been confined to China, this will now be extended to Japan, Hong Kong, Iran, South Korea and the four regions of Italy that are the subject of restrictions imposed by the Italian authorities.

Other mass gatherings will be risk assessed based on criteria to be developed by a newly-formed expert group, NPHET also decided. These criteria will be based on guidance from the European Centre for Disease Control and the World Health Organisation.

Mr Harris said there were also plans to step up visibility of checks on passengers at airports and ports, as well as in schools and public offices, immediately in order to counter the threat posed by the virus.

Ninety people have so far been tested for suspected coronavirus in Ireland and all have tested negative, the Minister also said.

There may well be a case of the virus in the coming days, he acknowledged.

Where people have been in the affected area and are not experiencing symptoms, it is recommended they visit hse.ie for advice.

“Anyone who has been to the affected regions in northern Italy - Lombardy, Veneto Emilia-Romagna and Piedmont - in the last 14 days and has a cough, shortness of breath, breathing difficulties or fever should self-isolate and phone their GP immediately.

“Anyone who has travelled from the affected regions in northern Italy and has no symptoms should visit hse.ie for advice. “

The most important measures people can take to protect themselves from the virus are regular handwashing and good respiratory hygiene, he said.