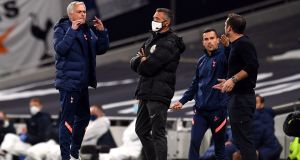 Jose Mourinho and Frank Lampard in conversation on the touchline during Tottenham’s shootout win over Chelsea. Photograph: Neil Hall/PA

Four South African franchises - the Bulls, Lions Stormers, and Sharks - look set to join the Pro14, after a SARU General Meeting yesterday voted to explore the possibility of them joining the competition. Their arrival could come as early as March next year, which would mean this year’s league is abbreviated before the tournament becomes rebranded and reconfigured as the Pro16. In his column this morning Gordon D’Arcy has suggested if the South African heavyweights move north, “the game will never be the same again.” And not necessarily in a good way. He writes: “Here we are, at the precipice, the point of no return for our 25-year-old professional sport. Once the South Africans enter the Pro14 everyone must jump off the cliff together. Only the strongest will survive.”

Stephen Kenny announced his Ireland squad for next week’s crunch Euro2020 play-off away to Slovakia yesterday, with Jack Byrne returning to the fold. And Ireland boss Kenny has pointed to the form of West Brom’s Callum Robinson, and regular game time for Shane Duffy at Celtic, as reasons to be positive: “The reason I see the move to Celtic as being advantageous is that they will certainly defend with a higher line and that is what we need; practice in that.” Elsewhere, in last night’s sole League of Ireland fixture Sligo Rovers beat Derry City 1-0.

1 Developer’s impeccably restored Fitzwilliam Square Georgian for €3.5m
2 Black Friday has become Black November for Irish retailers
3 Nearly 400 Brazilians have tested positive for Covid-19 in Ireland, data shows
4 One hundred Irish retailers for all your online Christmas shopping
5 Covid-19: Pressure over breakdown in tracing system intensifies as State enters Level 5
6 Life under Level 5: Where can I go, who can I see, what is closed?
7 How long can Government afford to keep State pension age at 66?
8 Should women erase men from their lives? This writer thinks so
9 Miriam Lord: All test and no trace makes Jack a very ill boy
10 Gym owner plans to defy restrictions and open
11 Des Bishop apologises to Traveller community for comments in interview
12 Suzanne Lynch’s US Election Diary: Trump ready to go on the attack over Biden's son in final debate
13 Newton Emerson: The Border is not the reason there cannot be a zero-Covid policy
14 Suzanne Lynch’s US Election Diary: Trump ‘walks out’ of TV interview at White House
15 Shock at golf clubs as sport faces shutdown in Level 5
16 No doctor, no pharmacy, no supermarket: I’m moving to an island
17 Golf clubs must close under Level 5 Covid-19 restrictions
18 Covid-19 laws: What can gardaí enforce and what penalties can be given?
19 Covid-19 outbreaks in schools almost double in one week
20 Welcome to Level Five: what does it all mean?
21 Andy Farrell reshuffles his hand for rescheduled Italy game
22 Top gadgets to help make your home safer this winter
23 Tennis clubs to remain open in Level 5 until ‘further clarification’ is provided
24 Philip Reid: Hard to find the sense in closing golf clubs
25 Varadkar says ‘dumping’ contact tracing problem on GPs ‘unfair’
26 Spit not yet polished for coronavirus testing
27 Bruce Springsteen quiz: How well do you know The Boss?
28 Call for financial support for west Kerry if Fungie does not return
29 Why work more than 15 hours a week?
30 Family settle case over death in hospital of 23-year-old woman
31 Supermarkets gear up for lockdown, Rivada’s US bid, and your home security tech
32 Pope must follow through on support for same-sex civil unions, says McAleese
33 People who throw house parties can be fined €1,000 and jailed for up to a month under planned law
34 Brexit: UK and EU agree to intensify talks in rush for deal
35 Much of what we think about Covid-19 is wrong. We need to change the conversation
36 US election: Trump voters are energised in North Carolina but the state is on a knife-edge
37 Marquees and fleets of delivery vans: how supermarkets are ready for Lockdown 2
38 Traffic light system for Covid detection to operate at Irish airports in November
39 A further three deaths and 1,167 new Covid-19 cases reported in the Republic
40 ‘My sister preys on people’s weaknesses, and causes nothing but trouble’
Real news has value SUBSCRIBE