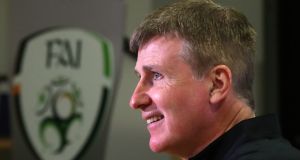 Ireland will be in good shape for next week’s Euro2020 playoff game in Slovakia according to Stephen Kenny who sees the number of club games his players have had and the form of individuals like Callum Robinson and Shane Duffy as significant positives ahead of the biggest test of his short stint in the senior manager’s job so far.

With three games to play in a week, the Dubliner has expanded his squad ever so slightly with Jack Byrne of Shamrock Rovers and Blackburn’s Derrick Williams both returning. Troy Parrott is, as expected, out through injury, but Callum O’Dowda and Robbie Brady are included with the manager hopeful that the pair will do enough at their clubs over the coming days to be in a position to travel.

Several squad members have thrived since the draw with Bulgaria and the loss against Finland at the start of September and Robinson, he says, has played his way into contention for the main striker’s role in Bratislava after some impressive performances up front for West Brom, not least the one last Saturday when he scored twice against Chelsea.

“We probably hadn’t been focusing on him as a central striker,” observed the 48 year-old, “but he’s given me food for thought.”

Since his move to Scotland, meanwhile, Duffy has been getting plenty of game time in much the same role that Kenny wants him to play for Ireland. “The reason I see the move to Celtic as being advantageous is that they will certainly defend with a higher line and that is what we need; practice in that,” he says. “They will have loads of possession and there’s practice in that as he’s a good passer of the ball.

“These are things that I think can benefit his play,” he continued. “If he’s playing two matches a week, which is the case nearly, that’s great. He will be really sharp and fit and he’ll get loads of practice playing how we will play in that we won’t be defending really deep and he will get plenty of the ball. I don’t see it as an issue. I know there is a trade off with (not playing in the Premier League) but they are playing in the Europa League as well which is high quality as well, so I don’t see it as a negative.”

Elsewhere, the early season form of players like James McCarthy and Séamus Coleman has provided encouragement ahead of what is clearly a critically important game given the huge desire to have the Irish team participate in a tournament the country is to play a part in staging.

Not everyone would be entirely happy with the opportunities they have had at their clubs in recent weeks, though, with a couple of the other main striking options - Adam Idah and Shane Long - still waiting to start a league game this season.

“We’re not claiming everything is perfect,” he said. “As a central striker we have David McGoldrick and we also have Callum Robinson who we can look at in that regard. Shane Long and Adam are at different stages of their career and maybe offer slightly different strengths so we are giving ourselves options in that regard.”

He might well, he suggests, need as many of those as he can get over the course of a week in which the team will return home to face Wales then head to Oslo for the second of the two Nations League games and his initial concern is that the 11 scheduled to be involved with Sunday games come through unscathed. Even then, the schedule has again severely hit the time he would have wanted for preparation.

Like Ireland, Slovakia made a poor enough start to their group in the Nations League competition but they were missing a number of high profile players.

Kenny is adamant, in fact, that their defeat by the Czech Republic and draw with Israel can be all but disregarded. Asked if the same might be said of Ireland’s draw with Bulgaria and loss to Finland, he again characterises his approach to those games as “experimental”.

Among the players returning for Slovakia are veteran midfielder Marek Hamsik, who is currently playing in China, and Lazio’s Denis Vavro, one of a number of the squad’s better players who are at big clubs in Italy.

“The games against Wales (drawn at home) and Hungary (won away, both last year) are ones we can learn from and they have a very settled team, good players,” he says. “Obviously (Stanislav) Lobotka is the main one for Napoli, Hamsik and (Parma’s Juraj) Kucka, the three midfield players are all very experienced and I have been impressed with them in the group.

“They tend to dominate possession in their games. For us, we haven’t as a nation won a significant away game in quite a while in qualifying … against a significant nation, so we will have to do something extraordinary now and go and win two to get to the Euros. It’s a big task in Slovakia but there is great spirit in the team.”