‘There’ll be no emerging into a brave new world in 2021, our myriad travails behind us’ 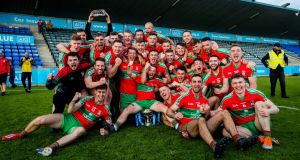 Would we have settled for this back in late April with the pandemic surging ahead and no end in sight for national lockdown? Most people in the sporting universe have been glad to have their chosen leisure interests back even if in the attenuated formats and empty venues of recent weeks.

One aspect of that time was the hope that it all might, like the first World War, be over by Christmas and that even if no GAA championship was completed, at least we’d try not to compromise next year by letting the 2020 All-Irelands overhang the calendar.

On the plus side, we have had an enthralling club season with all the well-aired advantages of unimpeded player availability and excellent conditions and the intercounty championship is locked and loaded and due in just over a fortnight.

The negatives are equally obvious and given that we are more than six months into the crisis, all the more depressing.

Dublin’s senior title races concluded on Sunday with just a smattering of spectators having been able to attend the matches, a situation replicated with just slightly less severity around the country except in Northern Ireland where greater numbers have been allowed.

For the moment the prospect of All-Ireland finals in December before historically low attendances is very real.

We’ll live with it and for the vast majority, the experience of this fretful season will be courtesy of another of the great positives to have emerged from the pandemic – universal coverage through broadcast and streaming services.

One thing is becoming certain, though. There’ll be no emerging, rapt with wonder and blinking at the brittle January sunshine, into a brave new world in 2021, our travails behind us.

That was spelled out last Friday by Croke Park’s head of games administration Feargal McGill, who has had the exhausting task of guiding the association through the nuts-and-bolts procedures of a safe return to play.

“Unlike when we were talking to you previously, I think we’re at a situation now where we know that next year is going to be an exceptional year as well. It’s not going to be a normal year. We know that now.”

He projected a convincing message that the GAA was confident that there would not be any unpleasant coronavirus complications with the championship schedules but also acknowledged that taking the latter stages of the All-Irelands into the new year had to be a contingency, however undesirable.

“Going on the evidence of thousands and thousands of club games, I don’t envisage that happening but it’s built into our plans at the same time, just in case.”

There has been a sensible flexibility about the GAA’s approach to what has been a dynamic situation and if a couple of post-Christmas weeks are needed to conclude the All-Irelands, there’ll be no complaints but what about the rest of 2021?

Obviously were the 2020 intercounty season still to be hanging around that would complicate matters and even given a free run from January, the club championships would take six straight weeks to complete, which would leave county players looking at a very protracted season.

It would also seriously disadvantage the champions of four counties - those in any January All-Ireland finals.

If however that’s not an issue and everything’s wrapped up by Christmas, there would be an appetite for the clubs to have the opportunity because the circumstances of this year’s county championships have been unique in strengthening relationships within club panels.

Dublin keystone James McCarthy was one of many examples of a busy county player who for the first time – in his case, for a decade – got to spend prolonged championship time with his Ballymun club-mates and he spoke of the achievement in winning a second title as being on a par with any of his All-Ireland medals.

He and manager Brendan Hackett expressed enthusiasm for further involvement. Will this national appetite still be there after a hectic intercounty season followed by Christmas?

Another interesting issue that arose from last Friday’s media conference concerned whether the GAA have considered regionalising next year’s league to restrict journeys and expenses.

“I think it’s a good question first and foremost,” said McGill. “What I would say is we haven’t given enormous thought to next year. Obviously we have some ideas in our head. I think it’s fair to say that I don’t think we’ll be able to play the full league in the format that we’ve known up to now.”

Again, this is a very clear indication that things aren’t expected to return to normality any time soon. Creating regional divisions would limit travel but also provide some novelty.

Back in 1992 the then NFL decided to introduce an experimental format by creating four divisions of mixed ability with a view to reintroducing a hierarchical structure in 1993 by taking the first two in each group into a new Division One followed by the third and fourth into Division Two et cetera.

They weren’t regionally based and some of the fixtures were hopelessly one-sided but the format created interest and some novel pairings as well as an increase in attendances.

Devising groups that have geographical proximity as well as a modicum of competitiveness will be challenging but they don’t have to consist of a uniform eight counties.

Farther into the future what will next year’s championship look like? The cataclysmic impact on GAA finances of tiny or non-existent attendances for a second year is obvious. Government assistance would again be needed to stage the big intercounty competitions and borrowings for other essential activities would escalate.

The likely outcomes are elusive. None of us has a crystal ball. Do we really want one?