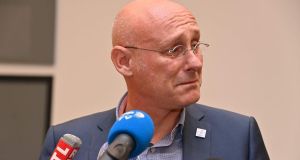 The French rugby federation president Bernard Laporte has said that he is “more confident than ever” of being re-elected for a second term when the 1,800 presidents of the clubs vote next Saturday. He has also maintained his complete innocence of any wrongdoing with regard to interfering on behalf of Montpellier in reducing a sanction against them and also in France’s successful bid for the 2023 World Cup.

Laporte, the Montpellier president Mohed Altrad, the Federation vice-president Serge Simon, the director general of their 2023 World Cup Claude Atcher and Nicolas Hourquet, head of the FFR’s international relations, were all questioned for 36 hours last Tuesday and Wednesday by the Economic Crime Repression Brigade (BRDE) in their Parisian offices.

The BRDE had been appointed by the National Financial Prosecutor’s Office (PNF) to carry out an investigation in 2017, and the PNF have still to confirm whether this case is now closed or not.

“I am more determined than ever to beat the campaign, to see the clubs that I love so much and for which I signed up four years ago when I left the professional world which paid me dearly,” said Laporte.

Asked why there is hostility toward him, Laporte said: “I do not know. What is certain is that after October 3rd, those who have a lot to do with it [in this affair] will be held to account. This is the only thing I have to say.”

“These are not threats, but those behind it will be held to account when the time comes.”

Asked about the claims of favouritism toward Altrad, whose company is also the main sponsor of the French jersey, and Montpellier, as well as Altrad making his private jet available for France’s World Cup bid, Laporte said: “I will not talk about the investigation.

“Mohed Altrad invests a lot of money in the development of amateur rugby, he puts €6.8 million in sponsorship on the jersey. That’s all I can see. He accompanied us for the World Cup. Where is the problem? He wants us to win the World Cup, him! This bid, we won it. The World Cup, we have it.”

“And I would like to say something about Mohed Altrad, who I haven’t heard from on the phone yet. I was disappointed to see what we could do to a 72-year-old. Why not inflict it on us? We are young and we played rugby? To spend a night without sleeping, eating badly, we can resist. We can afford that. But how hard it is to inflict this on a 72-year-old man who sought to help you, and who gave money to amateur rugby?”

“So yes it pisses the LNR (la Ligue National de Rugby) and in addition he is a jersey sponsor. But I promised you that we were going to have a jersey sponsor. We have it: €6.8 million per year for 5 years. It was the amateur clubs to whom we gave this money, to put in place all the reforms and we will continue to put them in place. He accompanied us to get the 2023 World Cup. This World Cup will bring €80 million to the club game and €3 billion to the economy. And we made this gentleman sleep in a cell where he slept badly and ate. It’s scandalous. I give him my support I thank him and I would like [him] to be applauded.”

Laporte was particularly aggrieved by an interview which his opponent in next Saturday’s election Florian Grill gave to Le Figaro.

“He declares that I have set the Federation on fire and blood. This is like kicking a player. And that is unacceptable. If these are the values of rugby, then above all, he has to be part of our sport. I knew he was a coward on the pitch because I know players that have played with him . . . But then, once again, that confirms his mentality.”

After half an hour in front of the media, Laporte broke down in tears and was unable to finish his last answer.

“When I left Toulon, I had a club that offered me €1 million a year! Okay? During five years. That’s all! Me, I said ‘no’ to those €5 million euros. Are they going to give me lessons?”

A reporter asked him if this week had given him even more strength, Laporte vowed: “I will never let go!”

At which point Simon intervened. “It’s okay, let’s stop there.”