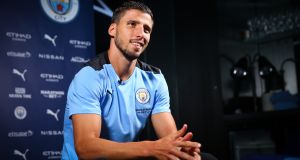 Manchester City have completed the £62 million signing of centre-back Ruben Dias on a six-year deal from Benfica.

Benfica on Sunday night confirmed they had reached an agreement to sell Dias to City for €68 million, with Nicolas Otamendi heading in the opposite direction for €15 million.

And City have now announced that 23-year-old Dias, capped 19 times by Portugal, has put pen to paper on a long-term deal after passing a medical in Lisbon, with his fellow defender Otamendi ending his five-year stay at the Etihad Stadium.

“To have the opportunity to join a club like Manchester City is a fantastic opportunity for me and one I couldn’t turn down,” said Dias.

“Their success speaks for itself. They have been the dominant team in England over the last few years, playing an attacking brand of football which I feel suits my own game.

“It is really exciting to be part of such a talented squad and to play for a world-class manager like Pep Guardiola, who has a proven track record of developing young players like myself.

“I believe I can improve here, at a club whose ambitions match my own, and I will give everything to be successful and win titles.”

Dias becomes City’s second defensive signing of the summer after bringing in Nathan Ake from Bournemouth in a deal worth an initial £40 million in August.

The club hope the two arrivals will address the defensive shortcomings evident in manager Pep Guardiola’s squad last season, while Saturday’s 5-2 thrashing at home by Leicester again highlighted their weaknesses at the back.

“Ruben is a player we have admired for some time and we have been impressed with how he has progressed at Benfica,” City director of football Txiki Begiristain said.

“He has developed into a real leader and as a defender, he has all the attributes we are looking for. He is strong in the air, good in one-v-one situations and technically he is very good, so we are confident he can thrive in our system.

“He is young but has gained valuable experience at a big European club in Benfica and we’re really pleased we’ve been able to sign him. He is another talented addition to the squad and someone who is only going to get better working under Pep.”

Otamendi (32) won several major honours during his time at the Etihad Stadium, including two Premier League titles, and made more than 200 appearances in all competitions in five seasons.

Dias’ arrival just a few days after a heavy defeat is a timely one for Guardiola, who looks set to turn to his youngsters for their Carabao Cup fourth round trip to Burnley on Wednesday evening.

Liam Delap, who scored against Bournemouth in the previous round last week, Taylor Harwood-Bellis, Tommy Doyle, Cole Palmer and Felix Nmecha could get chances, but Adrian Bernabe (knee) is out.

American Zack Steffen is again set to play in goal, while Aymeric Laporte and Oleksandr Zinchenko, both unused substitutes at the weekend, could get some game time to help build up fitness.