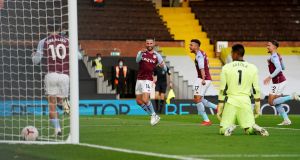 It was hard not to feel sorry for Bobby Decordova-Reid as he saw the claret and blue shirts swarming towards him. The Fulham winger knew his hopes of sparking a counterattack were fading. Reid had no support from his team-mates and he could do nothing more than boom an up-and-under towards Emi Martínez, Aston Villa’s underworked goalkeeper.

It was the kind of thing you see from a player looking to protect a lead in the closing stages of a game. Only, Fulham were 3-0 down and there was more than half an hour left. They were being played off the park and there was no sign any of their players believe they belong at this level.

Three games in and Fulham already look destined to return to the Championship. They are yet to pick up a point, have conceded 10 times and have a goal difference of minus seven after a capitulation that underlined the need for Scott Parker to bring in more quality at both ends of the pitch before the transfer window shuts next Monday.

Fulham were lucky it ended 3-0. After staying up on the final day last season, Villa are feeling quietly optimistic after starting the new campaign with two wins. Jack Grealish ran the show, John McGinn oozed class in midfield and although sterner tests lie in wait , it was impossible to pick any holes in a purposeful, powerful performance.

Villa took four minutes to expose Fulham’s defensive deficiencies. None of the home players were alive to the danger when McGinn, a clever and energetic player, received a pass 30 yards from goal. There was no response from Fulham’s frail midfield, no move to close the space, and McGinn had time to lift a pass through to Grealish, who darted from left to right before drilling a low finish through Alphonse Areola’s legs.

Fulham’s spirit evaporated and they almost conceded again moments later. McGinn, who appeared to be in his best condition since returning from a long-term injury in June, failed to find a team-mate after breaking clear on the left.

No bother: McGinn, who took the breath away with one glorious dragback as half-time approached, kept driving into dangerous areas and provided the assist for Villa’s second in the 15th minute. This time, though, the spark came from Grealish, exchanging passes with Ollie Watkins before slicing Fulham open with a scintillating turn of pace that took him into the area. Fulham were all over the place and Grealish showed composure to slip the ball to McGinn, who teed up Conor Hourihane for another emphatic finish.

Dominant in midfield and dangerous on the flanks, Villa could have made it three but Trézéguet screwed a poor shot wide and Watkins then headed a Hourihane cross wide from close range.

Villa did not appear to need the insurance of a third goal, though. Outnumbered in midfield, Fulham were limited in their 3-4-3 system and barely created anything. Ivan Cavaleiro and Decodrova-Reid were ineffective on the flanks and Villa’s sturdy back four found it easy to repel the constant crosses from Fulham. Ezri Konsa and Tyrone Mings were solid in central defence and on the one occasion Aleksandar Mitrovic looked poised to give his markers the slip Matty Cash stormed across from right-back to dispossess Fulham’s lone striker.

Cash already looks like a smart buy from Nottingham Forest. Villa have shown ambition. Watkins gives them mobility in attack after arriving from Brentford and Grealish’s decision to commit his future to to the club has given everyone at Villa Park a lift.

Grealish is such a special talent. Fulham had no hope of handling him. Two minutes into the second half, Grealish pushed the ball past Denis Odoi and tore past the centre-back despite giving him a five-yard headstart. Odoi dragged Villa’s talisman down, earning a booking, and Fulham capitulated from the resulting free-kick, freezing as Mings slid Hourihane’s delivery past Areola.

Fulham’s misery continued when Mitrovic had a goal disallowed after a VAR review detected a foul by the Serb on Konsa. Villa had their clean sheet and Fulham were left to contemplate how to navigate the long road ahead. - Guardian